BLUEBELLS and a 100 word story

I have spent the past two weeks in England visiting family. I won't bore you with the details except to say that roughly 60 people attended my granddaughter's christening, and about two-thirds of those were related to the baby!

Spring in England is glorious, and especially so in Sussex and the South Downs. One lovely morning I went with my two daughters, their husbands and the baby to admire the bluebells around Ditchling Pond, and this photograph prompted my first 100 word story of the month. 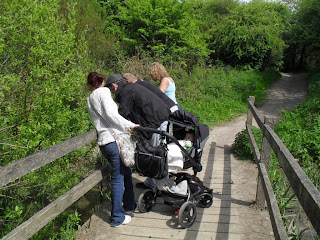 They peered over the rail, trying to locate the source of the sound.
“I told you to tiptoe across,” Mandy scolded, “Now you’ve woken it up.”
“Nonsense - that was only a frog.” Alan raised a chauvinistic eyebrow at Jon and they stamped their feet defiantly.
“Stop it!” Debs pleaded, “I’ve just got her to sleep,” but it was too late. As Millie began to whimper, Debs wheeled the buggy away towards the bluebell field. Mandy treated the lads to a withering glance and followed her sister.
“Women’s hormones,” Jon scoffed, just as a huge hairy hand grabbed his ankle. 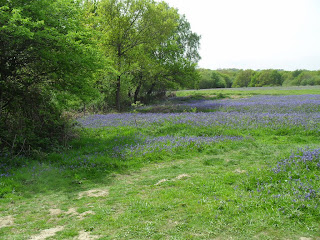