VERY HOT CHILLIS - my OH does like his chilli plants, and these pencil chillis have just ripened in the past few days. Fancy one?

VEHICLE – In May 1940 Albie and his depleted squad destroy a German tank, losing two more of their own men in the process. After a brief roadside burial they know they have to move fast – the explosion will have attracted attention – but they have no transport.

Thompson turned to Albie and asked, “What now, Corp?” thereby acknowledging that, with the Sergeant dead, they were under Albie’s orders; “Shall we catch up with the others?”
“They’re miles away by now,” Green commented sourly, “And we got no transport.”
“Would this do?” asked Darby, pushing open the shed door, and they crowded inside to stare at the strangest vehicle any of them had ever seen.
If it had ever been a thing of beauty, the evidence now lay under layers of mud and chicken droppings. A topless, backless box of a cab perched behind the engine, there were no bumpers or headlights, and the open back had obviously been created by taking a saw to whatever bodywork had originally been there. When Paddy rubbed the paintwork of the door with his sleeve they read ‘Marc’s Glaces’ – their new vehicle had started life as an ice-cream VAN. 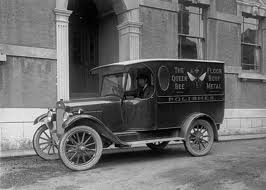 We know they reach Dunkirk because Helter-Skelter opens with them on the beach (see my C blog for a snippet) but the full story of their perilous journey through the last stretch of France to get there is at the end of my novel. I think the idea of the ice-cream van lightens the story just a tad.
Imagine something like this but a lot less cared-for!

VILLAFLOR is the highest village in Tenerife, 1400 metres above sea level, but many a clapped-out old van still climbs the precipitous winding road that is its only access. Getting stuck behind one of those is only one of the hazards - in the winter Villaflor is sometimes cut off by snow.
Around 2000 people inhabit this peaceful 16th century village, living mainly by agriculture and viticulture – the wine is lovely. 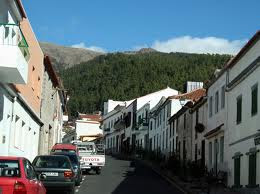 Its most famous son was Hermano Pedro, Tenerife’s only official saint, whose cave hermitage is at the other extreme - almost at sea level near El Medano, in a VERY noisy position right next to the airport. The airport authorities wanted this place of pilgrimage closed for security reasons, but everyone said NO! Quite right too – Pedro was there first - but sometimes the planes take off to the west and if you're standing outside the cave the noise is tremendous - I love it! 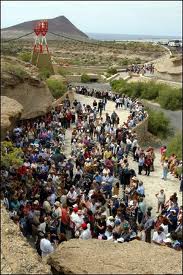 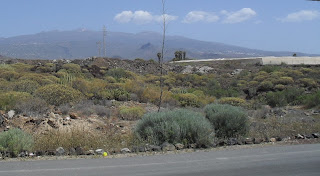 Living so near to a VOLCANO we claim to be blasé about volcanic activity, but when we see clouds that resemble smoke issuing from a chimney, we do wonder ………