A nubile virgin every spring or he’d destroy the kingdom – that was the bargain the Minotaur had made with the King. Parents prayed that the gods would send them sons and wept when their prayers went unheard. Mothers bound their daughters’ breasts, or married them off before puberty. Anka’s parents tried a different ploy, treating her as a boy from the moment of her birth. Her father even taught her to fight until her swordsmanship out-stripped his.

At the winter festival the year Anka turned fourteen, the King’s men quartered the crowds like pickpockets, noting which girls had reached maturity. No-one slept easily until the choice was announced and, acting on a whisper from a jealous neighbour, they picked Anka.

Guards pushed her into the Minotaur’s maze and retreated, leaving her with only the rats for company, but around the first corner, her father met her. Passing her a sword, he whispered, “I cannot stay – I must be seen weeping with your mother – but remember what I taught you – you can do this.”

Trembling but determined, Anka followed the roar of the hungry beast to its source. She faced a bull’s head armed with fearsome horns, but the body was that of a man – dangerous or not, she could kill a man.

The creature was not expecting a fight. It was all noise and bluster, and had spent a whole year lying on its bed of virgins’ bones. Anka, young and agile, danced around the lumbering beast, darting in to slash its Achilles tendons and, when it fell, to plunge her sword deep into its black heart.

When the beast fell silent the chanting of the priests rose to a crescendo, but over it all Anka heard her mother screaming her name. Like a bee to the hive, she followed that thread of love out of the maze to freedom. 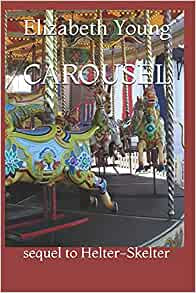 I live in West Sussex and spend my time writing, reading, and with family and friends. The four books in my LIVING ROCK fantasy series are - A VOLCANIC RACE; WOLF PACK; LANDSLIDE; ROCK FESTIVAL. Historical novels HELTER-SKELTER and CAROUSEL, written as Elizabeth Young. STRIPEY CAT - a book of poems for children. YOU NEVER GAVE ME DIAMONDS - poems about love, dementia and loss.