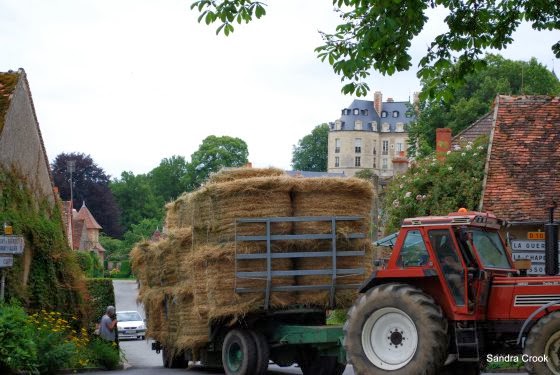 When we were boys – before the war – we loved harvest-time.

We would surround the last stand of wheat armed with sticks to kill the rabbits as they made a dash for freedom, then we’d ride on top of the loaded wagon, shooting with our stick-guns at mothers and sisters, yelling, “Bang! You’re dead!” and throwing them the rabbits to make stew.

Now we hide between the bales armed with rifles to shoot the soldiers, and then flee like rabbits to the caves where we cook our own dinners.

They should have left our mothers and sisters alone.

Do follow the link to read the other stories;
http://new.inlinkz.com/luwpview.php?id=369046
Posted by liz young at 16:34 27 comments: Links to this post 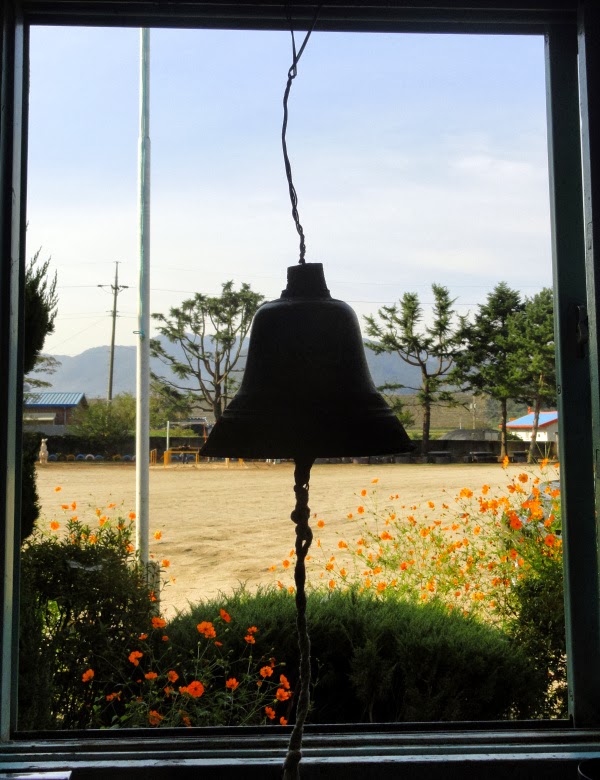 THE CARER
That bloody bell rules my life.
Help me dress, Josie, empty the commode, Josie, make breakfast.
Sometimes I escape into the garden and hide – no one’s tended it since Dad took Des fishing and never returned. Mum thinks they drowned but I’ve learned different.

She was wearing different clothes when I came home from school yesterday. She thought I wouldn’t notice cos I’m only eight.

I pick my bag up from the porch and peer through the curtain. Mum’s already out of her chair looking in the fridge. There’s a week’s worth of sandwiches in there.

I'm a bit late on parade this weekend - visitors and family matters intervened - but I hopr you'll take the time to comment.
Friday Fictioneers in a group of online writers who each week are prompted by a link on Rochelle's blgo to write a 100 word story.  http://rochellewisofffields.wordpress.com/
Posted by liz young at 18:41 14 comments: Links to this post The bus drivers on Tenerife and the other Canary Islands have to be skillful, intrepid and well-trained. The passengers of the local bus company Titsa must also be fearless, or at least prepared to shut their eyes and pray. Round here we call a bus a 'gua-gua', pronounced 'wa-wa', and until last month I didn't know why. 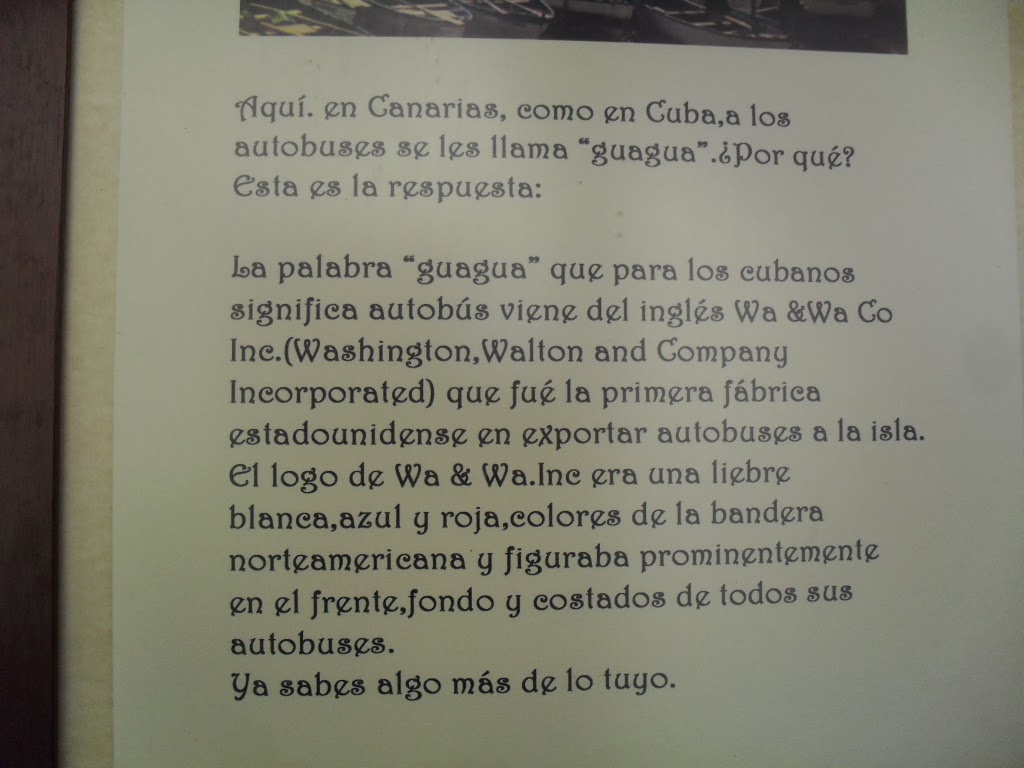 In a wonderful old restaurant in the back streets of Santa Cruz, on one wall of the central open air courtyard, there was a framed explanation. Roughly translated it tells us that an English firm - Washington, Walton and Company Incorporated - exported the first buses to Cuba, and the nickname 'Wa-wa' was born.
The Canary Islands have strong connections with countries on the other side of the Atlantic thanks to economic migration - and the name has been in common use in Cuba and over here ever since. 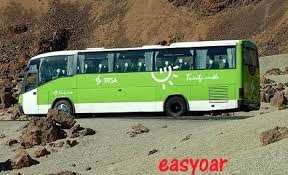 Or so they say - whether it's true or an urban legend is anyone's guess! 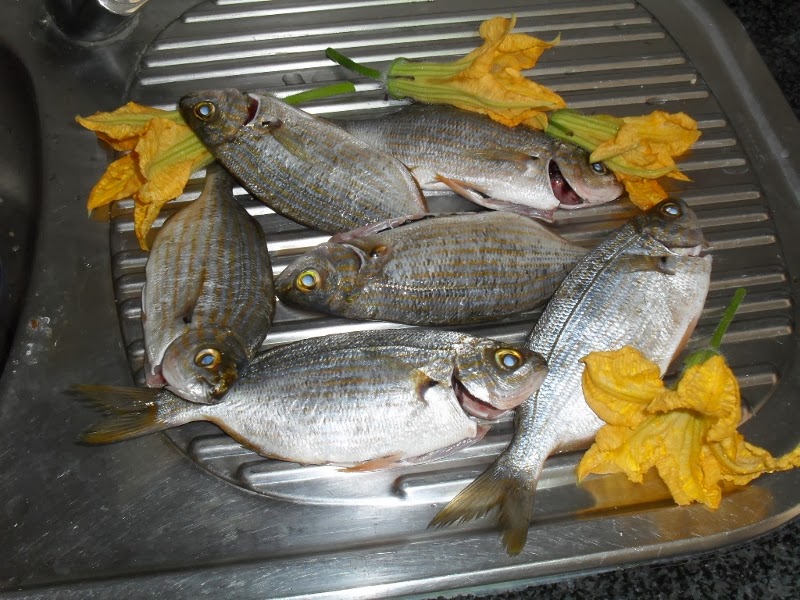 I went out yesterday to buy some fish for my supper down at the open air market on Las Galletas sea front. The fish there are straight out of the sea - you can often see them being brought ashore. On one occasion we bought a bonito and as the man gutted it a squirming sardine shot out of its mouth - its last meal was still alive!

This time I only wanted a few fish as the OH is away, but the woman persuaded me to buy five - the sixth one was free. I think she said they were salmonetes de dorada, but as long as I can just stick them in a frying pan it doesn't really matter what they are.
Another customer joined our conversation - a lady about my age who was bemoaning the lack of work for older women - and as we chatted I looked past the fish-woman towards the beach.
"Are those courgettes?" I asked her.
"No - they're calabacines - they just grew here."
"My friend used to paint them with egg white and fry them," I said, and before I could stop her she'd cut me four blooms.
"There are plenty more," she said when I protested, "The water from our stalls drains out there, and someone must have spat some seeds." 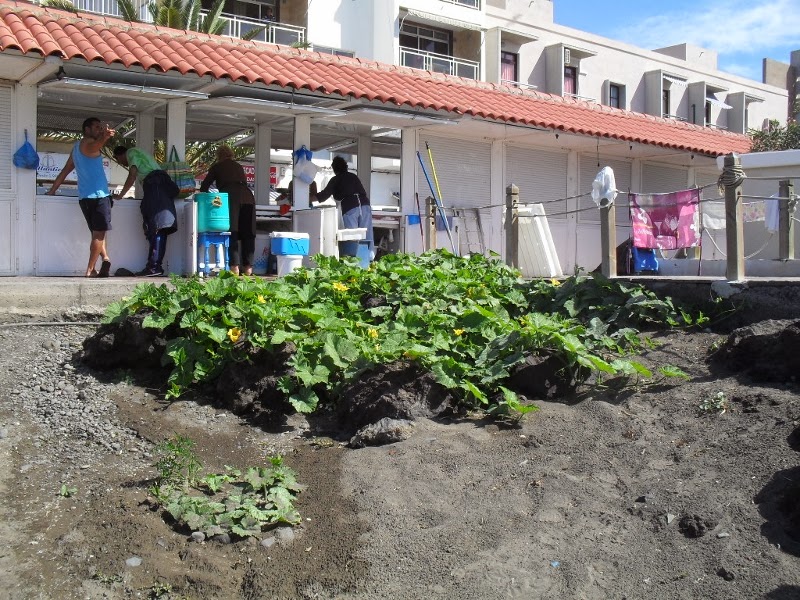 This is a view of the back of the stalls and the plants just growing in the black sand. My benefactress is the smaller of these two stall-holders, and an excellent saleswoman - I shall have to freeze some of my fish! 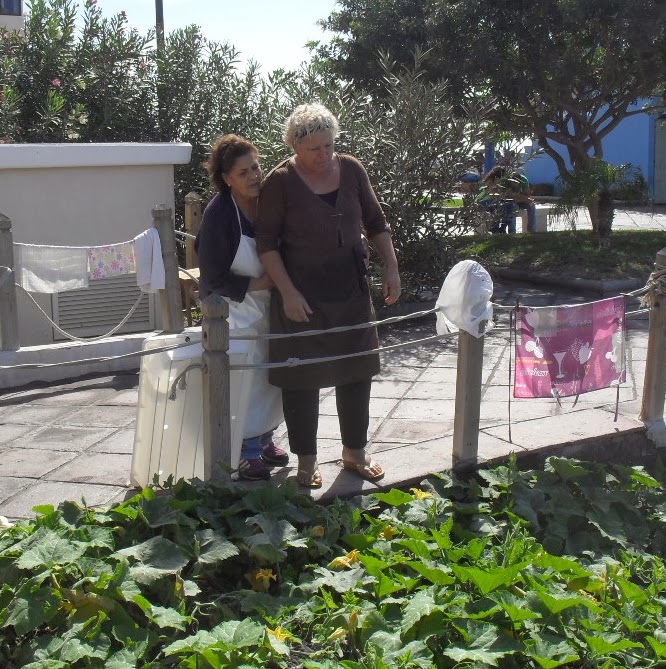 So that's how a simple shopping expedition became a small adventure.
Posted by liz young at 17:58 8 comments: Links to this post 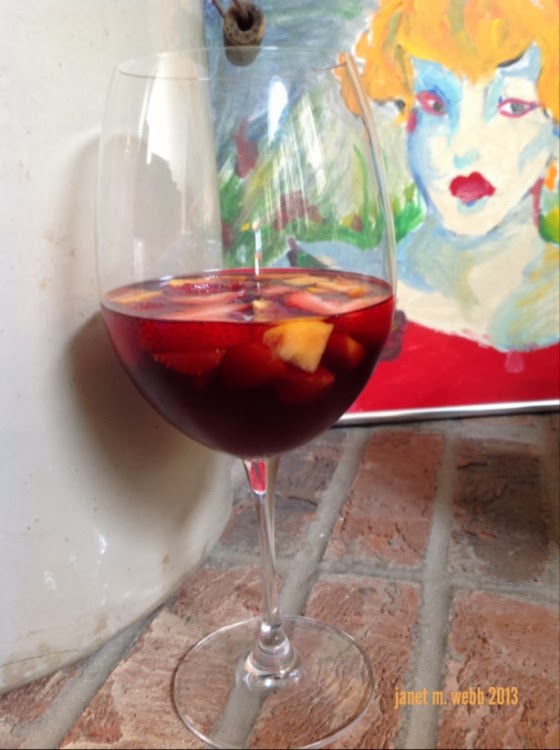 Sylvia sipped her glass of sangria, trying to conceal how devastated she felt.
Mario hadn’t even looked back as he strode off wearing the Rolex she’d bought him - such a cruel boy to call her old! Age was a state of mind, not years.

Friday Fictioneers is a group of writers from around the world who convene online each week to write 100-word stories prompted by a photo posted on Rochelle's blog.

http://new.inlinkz.com/luwpview.php?id=363453
Visit the other group members and read their stories too. 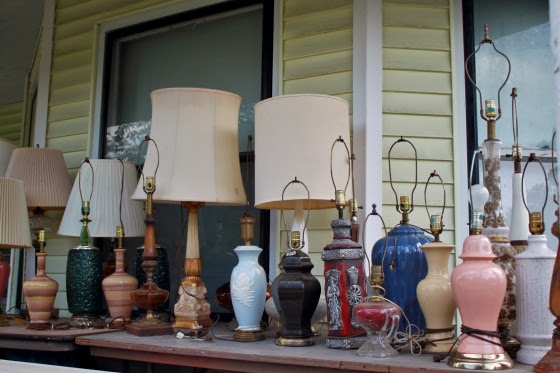 You wanna buy a lamp?
Hang on – I know you! You got the makings of a spliff on you?

Paul? No – he’s gone. He was a weird one - everything had its own special place and you’d better not move it. He was a pain to live with, but I put up with it until the business of the lamps. He found fault with each one I got, so I cracked him over the head with the last one.

No, I can’t remember which one – does it matter?
Each one’s a quid whether it’s a murder weapon or not.

Friday Fictioneers is contributed to by writers from all round the world. We write 100-word stories prompted by a photograph posted on this site
http://rochellewisofffields.wordpress.com/

This is a Russian replica of a ship first launched in 1703, and which is touring the Canary Islands this month.
I went to see it this morning in San Miguel harbour, where it looks enormous beside the usual yachts, but tiny compared with the Queen Mary ll which we saw in Santa Cruz de Tenerife last month!
There's a fierce lion on the prow rather than the buxom beauty you might see on an English ship, and the ferocious theme continues with eagles and talons everywhere. 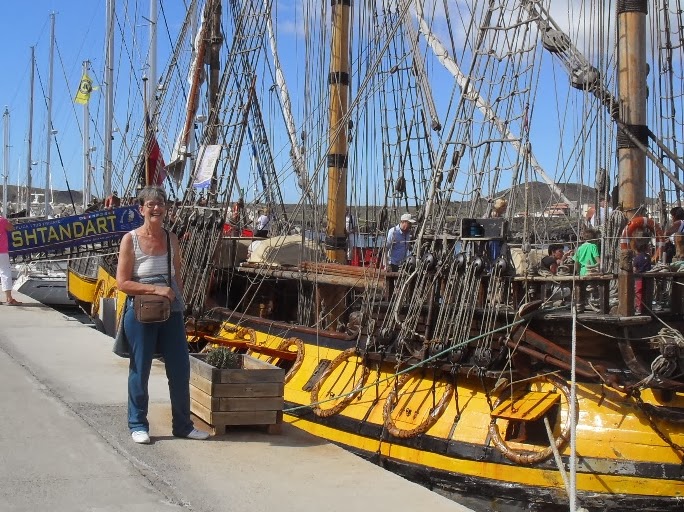 For the knowledgeable friend who was with me, every rope meant something, but to me the miles of rope would be bewildering. You can book passage on it, when presumably you would learn what they all do. Although there were a few modern touches, such as a wide-screen TV among the hammocks, I think a sea voyage aboard this lovely wooden boat is for people younger and fitter than me. 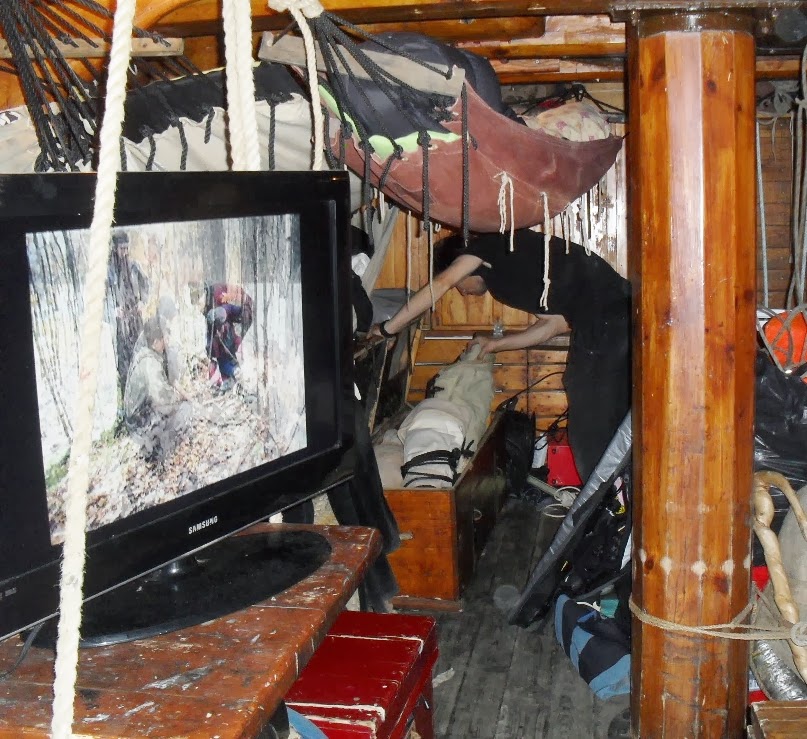 The chart room aft had a door either side, 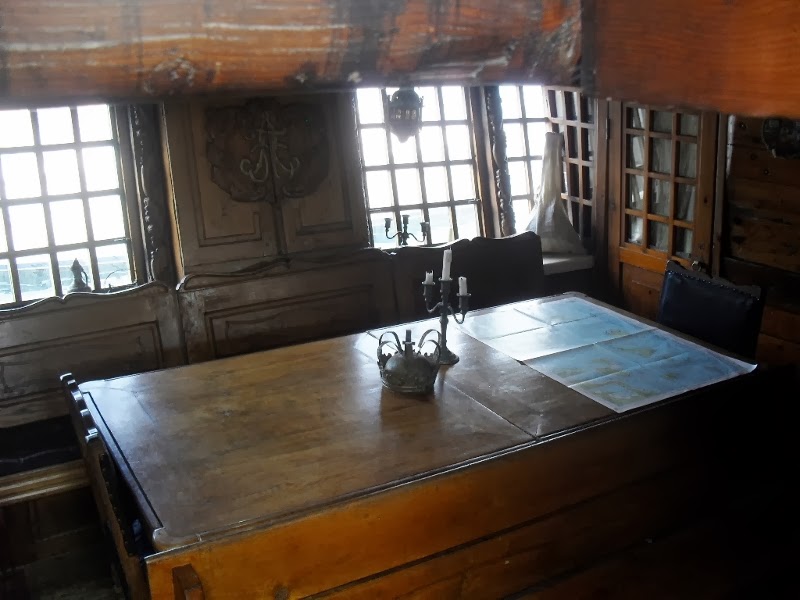 each of which led to a room totally filled by a bunk, presumably for the captain and mate, but everyone else sleeps in hammocks. 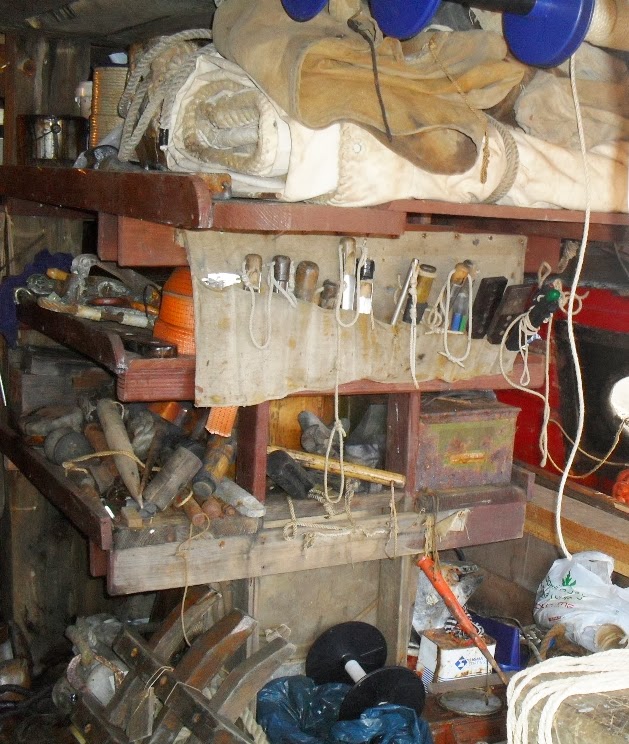 The workshop was a shambles but as they'd sailed from St Petersburg I assume the crew knew where everything was! We wandered at will except for the lower deck and discovered a strange troll tucked away in a corner. 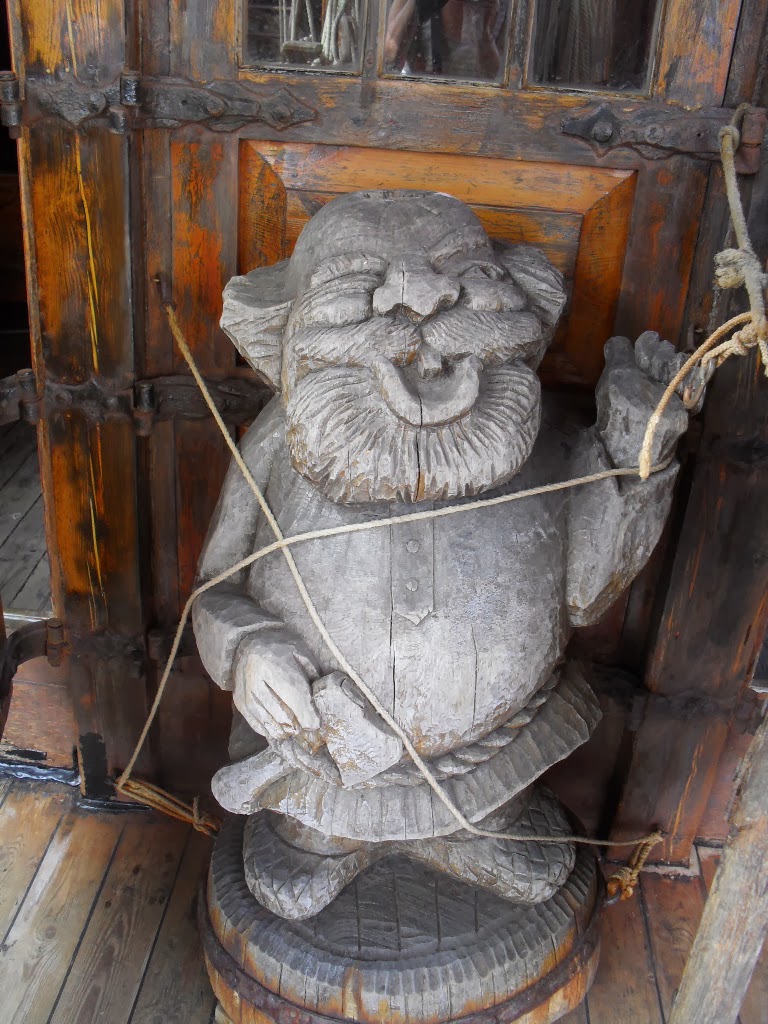 The only part of the original boat is the bell, because when the Russians tried to lift the wreck from the sea they used ropes rather than a cradle, and the wreck was so fragile that the ropes cut it into several sections. 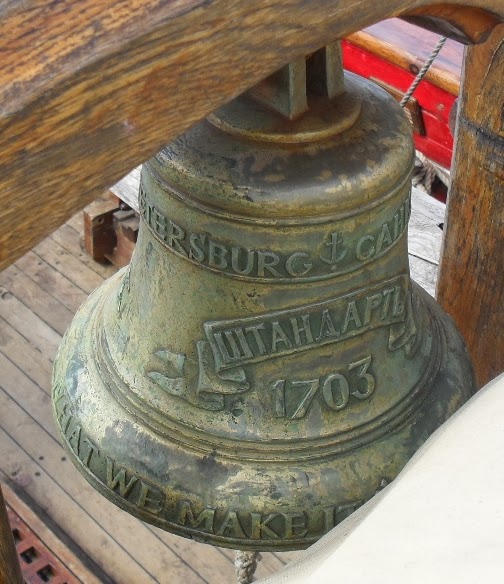 We did wonder if whoever did that is now toiling away in a salt mine!