I’ve given in – I’m going to do it, starting tomorrow.

For those who don’t know, this is a challenge that hundreds of bloggers put themselves through each year – to blog every day bar Sundays throughout April using the letters of the alphabet as a guide. When I added my name to the list I was number 1559, so people who start at the top won't reach me!
My posts will be short, though not necessarily sweet, and my theme will be my current obsession -  the re-write of my novel Helter-Skelter – so you will have to bear with me.
And I love comments if they come with your name!
Posted by liz young at 10:59 3 comments: Links to this post

A SPLASH OF COLOUR!

No - we did NOT do this on purpose!


I bought a pair of baggy cotton trousers in Fat Face at Gatwick two weeks ago - they were half price in their sale and I couldn't resist them. Today is only the second time I've worn them.


When the OH appeared from his bed of pain (he is recovering from man flu) this was the shirt he'd put on.


Note to self - see what he's planning to wear before getting dressed. 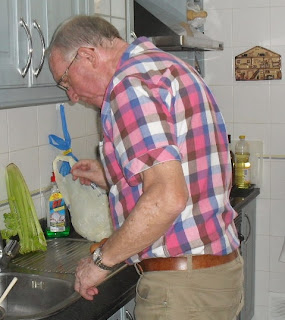 Carol Bevitt   gave me this award today – thank you Carol - and I hope I live up to the list. To earn this award I must answer some questions, give you a link to Carol, and pass the award on to other bloggers. Luckily there are only four questions this time – my last award had dozens!

If you could change one thing, what would it be?

The belief that the way you worship is an excuse to wage war on other religions.

If you could repeat an age, what would you choose?

I’d take today’s maturity back to when I was 40 – the year my youngest child started school. If I had begun writing novels then I might be published by now.

What one thing really scares you?

I am really afraid of losing my eyesight – I’m too old to learn Braille.

If you could be someone else for a day, who would it be?

God. Or if God won’t take a day off, I’ll be the person who programmes the lottery machines – I could use a few million!

I would like to pass on the Reality Award to:

Rosalind Adam - http://rosalindadam.blogspot.com because we think on the same page and are much the same age;

Rob Crompton - http://snigsfoot.blogspot.com because he places his books in real places (Reality – get it?)

and Fiona Ross - http://fionafaithross.blogspot.com for the advice and help she has given me so freely.

Please check them all out and enjoy reading their answers too.

To celebrate World Poetry Day today I have copied one of mine to my POEMS page - (see right)
It's entitled 'Cold' - which might ring a chord with my friends and family in England.
I wrote it in 1961, which I realise to my horror was 52 years ago.
Even so, I don't look too bad for an old bird, especially since I had a haircut yesterday! 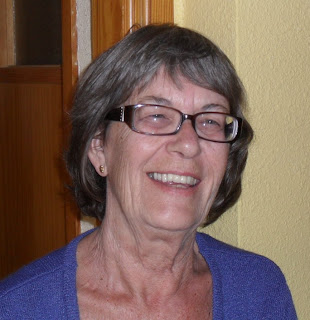 ON YOUR FEET! The benefits of exercise. 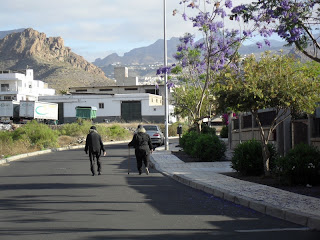 What is it about walking that sets the creative juices flowing? I always think more clearly on the move and this morning was no exception.
I started off on my usual route, munching an apple and brooding over a rejection, but when I threw away the core for the lizards to find I gave myself a severe scold and forced the grey cells onto my latest project - re-writing my novel Helter-Skelter.
I had been reading one chapter yesterday afternoon and as I began thinking about that this morning it suddenly dawned on me that it contained a serious error in chronology. After numerous readings this is the first time it has occurred to me, which just goes to show that you can skim over your own mistakes far too easily - but even my daughter, who reads everything I write, hadn't noticed.
So I stopped at a cafe, ordered a coffee, and scribbled some notes before I could forget my flash of insight. I go for a walk most mornings - perhaps I should do so more often, and for longer.
Posted by liz young at 16:59 10 comments: Links to this post 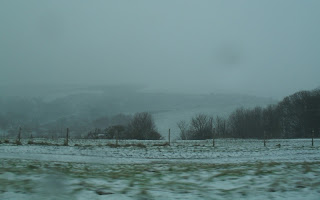 For those of you who missed the snow in Sussex last week, or don't get snow in your own countries, here are some photos taken last week. 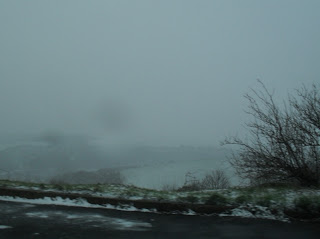 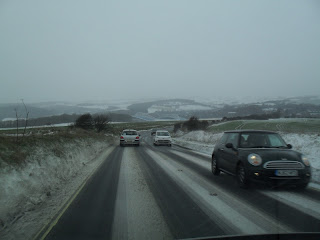 ROAD OVER THE DOWNS 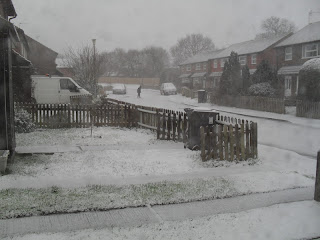 THE ROAD IN FRONT OF MY SON'S HOUSE 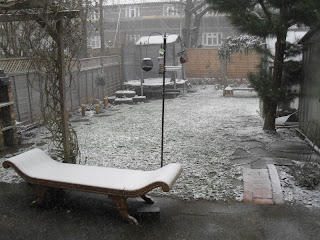 THE GARDEN AT AROUND 4PM 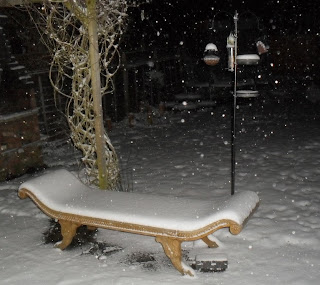 THE GARDEN AT 9PM WHEN WE KNEW MY DAUGHTER HAD ALREADY BEEN STUCK ON THE A23 FOR FOUR HOURS. 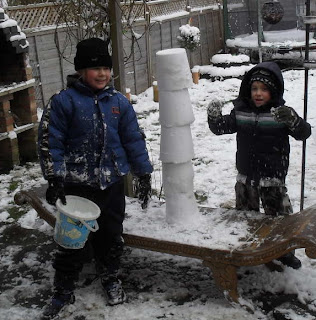 AN EXTRA DAY OFF SCHOOL - YIPPEE!!


And some scenery to finish with.

this is how we like snow - here today, play tomorrow, gone the next! 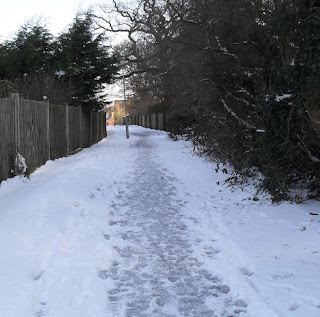 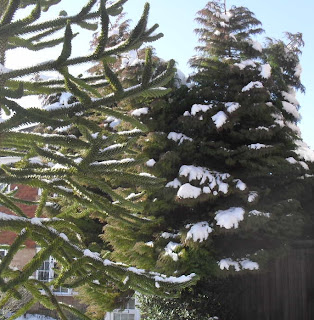 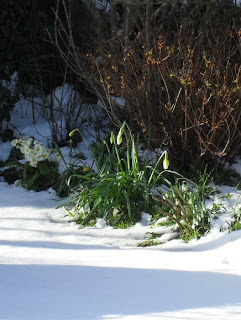 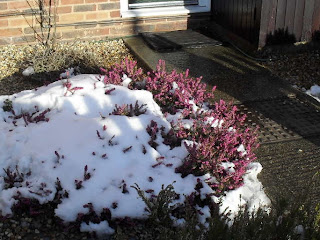 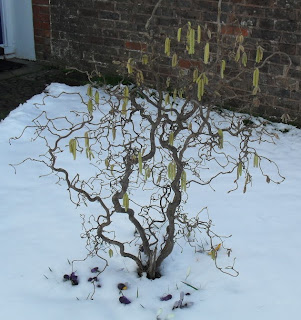 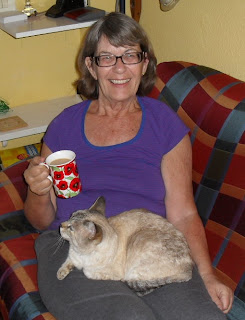 Back home in time for a cup of tea followed by a drink at Bar Leones and supper at Pepe's.
Kika was so delighted to see me that she turned a dozen somersaults, which is quite an achievement for an old cat - she must be covered in bruises under all that fur - and she had a paw on my lap even before I had lifted my legs onto the sofa.

I also discovered I acquired two more followers while I was away, and I would like to extend a warm welcome to them. 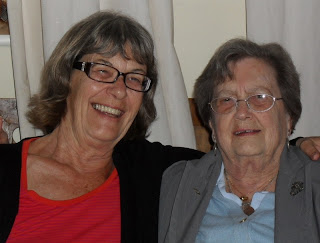 The two weeks I spent visiting family and friends in Sussex were lovely. For one thing, it was the first time in thirteen years that I have celebrated Mothers' Day with my mother and my UK children and their families. They looked after me beautifully and I stocked up on grandson cuddles, though you can never have enough of those, can you?

The weather was kind to me too. I was only rained on once, and the snow that fell on Monday lasted just long enough for me to enjoy the novelty. This was the blizzard we drove through on Racecourse Hill outside Brighton, but we were home in time for tea. 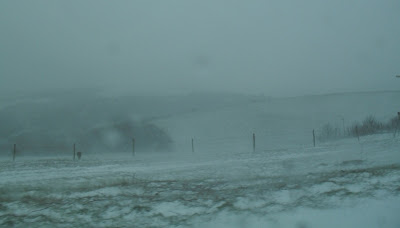 My daughter wasn't so lucky. She left work in Crawley at 5pm and was stuck on the A23 for eight hours. We tried to find news and updates on the radio without success. My son phoned the police to ask what was being done to help all the stranded drivers, but he got no satisfactory answers, He would have rushed off to his sister's rescue if we hadn't persuaded him that if she couldn't get out, he wouldn't be able to reach her!
She survived, tired but unscathed, but there must have been mothers with young children in that cold traffic jam, people in need of medication, and drivers without sufficient fuel to keep their engines running to stay warm. We were not impressed with the failure of the Sussex Police to react more quickly to the emergency.

On Tuesday, though, school was closed. We built two snowmen - Clean Bob and Dirty Bob - then walked over the fields to make snow angels, and by teatime the sun had started to thaw the snow. 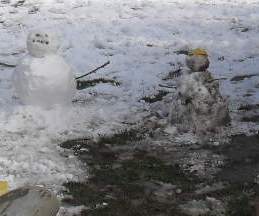 Those two weeks gave my eyes a rest from the screen and my grey cells a chance to ponder the best way to tackle the task ahead - another re-write. I was telling my son about it and he asked, "What would you put on the back cover?" Just thinking how to answer that question has helped me to focus on my story and to identify my main theme. Thanks for the inspiration, John - next time you come to Tenerife I'll buy you a pint of Dorada! 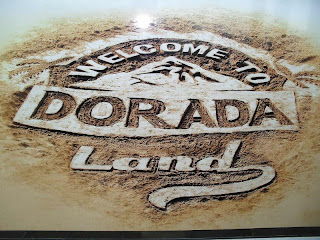