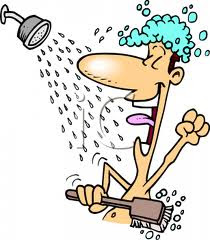 We think our shower may be haunted - or at the very least there was some sort of strange psychic energy in there this morning.
As we were drinking a coffee in Las Galletas today I said to the Other Half, "I had this weird sensation in the shower this morning." (All those people with dirty minds go to the back of the class.)
"What was that?" he asked, which proved he had actually heard me - a miracle in itself.
"A moment of deja vu ," I told him, "But the main thing is that it gave me an idea for a story." I described my idea - an off-the-wall one as most of my story ideas are - and it will get written when it's stewed for a while. In the meantime the OH had his own experience to add.
"There must be something peculiar in the shower today," he said, "Because I was about to get out when I realized I hadn't washed my hair."
Now that IS spooky. The OH takes great pride in the fact that he still has hair at 77, and he uses an inordinate amount of 2 in 1 shampoo. For him to forget to wash the locks is strange indeed.