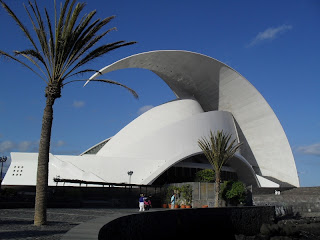 Yesterday evening we drove up to Santa Cruz for a concert at the Auditorio in its beautiful setting overlooking the Atlantic Ocean.
Jonathan Webb conducted la Orquesta Sinfonica de Tenerife as they played Sibelius  and Nielsen, but in honour of HRH Queen Elizabeth's Diamond Jubilee they started the programme with the march "Orb and Sceptre" which Sir William Walton wrote for her Coronation. 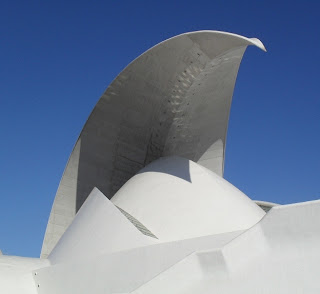 We had been invited to the concert, along with a dozen or so other members of the British expat community, by the President of the Cabildo, Senor Ricardo Melchior Navarro, and the British Consul to the Canary Islands, Maria Lang, and we were expected for drinks and nibbles beforehand.

"Be there promptly at 7.30," we were told - we had to collect our tickets from the Consul because there was no time to post them - and so, together with Kelly and Jean, we arrived half an hour early. Could we get in? No way! Every door was shut or manned by staff who directed us elsewhere. The Auditorio is splendid, and they haven't spoiled its clean lines by anything as mundane as seats outside, or a cafe nearby, and definitely no toilets. 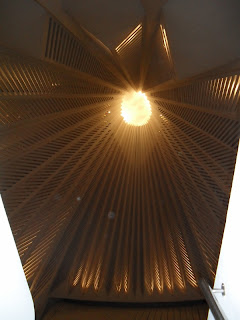 After we had wandered round the environs for a while, the cafeteria finally opened and we rushed inside to avail ourselves of the toilets - bliss - and buy a bottle of water at only four times the shops prices. Still no sign of the Consul.
Eventually we located the tiny lobby in the bowels of the building off the parking garage where we were supposed to meet her, and shook Senor Melchior's hand in front of a photographer who seemed to be armed to the teeth with enough cameras to make a full-length documentary. Then we ascended in a tiny lift to the backstage areas, through a maze of corridors and into a reception room where we met Jonathan Webb.
After a glass of wine, a piece of cheese, and a few photographs to mark the occasion for posterity, the OH and I walked up to the balcony with Senor Melchior, who talked about his unfounded fear when the Auditorio was being built that the accoustics wouldn't match up to the architect's promises (or salary!) My first view of the interior of the accoustically-correct roof was from the stairs up to the balcony. 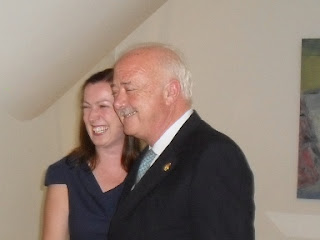 This is a photo of the Consul and the President of the Cabildo - she's the Consul for all seven Canary Islands and seems never to stop for breath, and he's the head honcho in Tenerife.And this is me, overtaken by such a rush of patriotism that I spent the previous afternoon making a red, white and blue choker to hold my Royal British Legion badge! 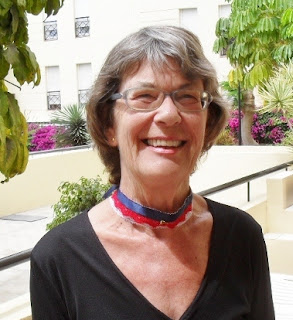