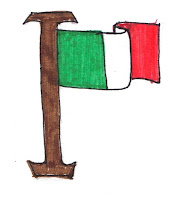 IDIOMAS = LANGUAGES. When we arrived here to live we had to learn INSTANT Spanish, because we were buying our apartment privately from a couple who spoke no English. If we were meeting Juan and Carmen to discuss our purchase I would write it all down in advance – that way I could read them my notes if we got stuck.
It was a tense time, renting in Las Galletas and knowing we’d shot our bolt financially if it all went wrong. I bought a set of flash-cards that reminded me of teaching my son to read, and we tested each other in the evenings. Ayuntamiento was our first long word – it means Town Hall, where we had to go for some of our paperwork. INTERESTINGLY, it also means sexual INTERCOURSE, according to my dictionary! Many words have two or more meanings, and often only an accent differentiates between them. The OH learned the hard way to say “Feliz Año” – Happy New Year – with the ñ as in España. Without the accent, ano means arse! At times we regretted not opting for France, where we already spoke the language, but we got our Residencias and signed up for our apartment without any problems.
Old gits we may be, but when there’s a strong enough motive we can do anything.

Some of our first neighbours when we moved into our own apartment were a young ITALIAN man and his Ecuadorean wife. Paola spoke South American Spanish as well as Italian, but Massimiliano only spoke Italian, so we went through some of the Spanish-learning process together.
At my 60th birthday party they announced they were pregnant, amid great rejoicing. When the date was IMMINENT we discovered that their entire family INTENDED to descend on them for the birth – Paola’s mother, Massi’s parents and grandmother, and his uncle and aunt and cousin, and his best friend from Milan. For a whole month! How would they all fit into a two-bed apartment, I asked. Massi shrugged – they’d manage somehow for such an IMPORTANT occasion.
So we offered them our spare room. We got the uncle and aunt. A lovely couple about our own age with whom the OH and I communicated, in their Italian and our limited Spanish, with the aid of a ‘Seis-idiomas dictionario’ I’d picked up at a car boot sale. It’s INCREDIBLE what you can achieve if you set your mind to it.
The baby was beautiful - an olive-skinned, black-haired dumpling - and how the young mother coped with such a houseful, and the large dog her husband acquired before they met, I shall never know. When the family had all gone back to ITALY we became substitute grandparents. My Spanish IMPROVED in leaps and bounds, discussing breast-feeding and nappy rash and IN-LAWS with Paola. 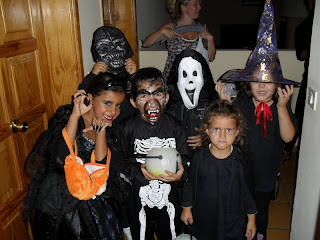 Then a year later there was another INVASION when they all came back for the christening. There were about twenty children all being baptised in the IGLESIA at the same time, each of them with their own entourage of camera-wielding family and friends. It was total mayhem but the priest managed somehow, then we lined up for INNUMERABLE photos on the church steps, piled into whichever car was nearest, and went to a restaurant for a party that seemed more like a wedding reception than a baptism.
Roberta’s seven now and she calls me “Leez”. She makes allowances for my stumbling Spanish and brings crowds of her friends Trick-or-treating at Halloween - and I love it. She's the one on the left.

ILLEGAL IMMIGRATION is a problem that hits the newspapers at about the same time each year, presumably when the prevailing winds are right for crossing the hundred miles of open ocean between Africa and here. Desperate people pay large sums of money to be crammed into pateras (open wooden boats that are far from sea-worthy) and towed out into the Atlantic. If they are lucky, the owners of the motor boats set them adrift within sight of land. They are usually picked up by the Coastguard radar and escorted to a harbour, where the Cruz Roja checks their health and then they are bussed to a detention centre. Most of them are sent back, but they keep coming.
I have witnessed the arrival of two pateras in my time here – one actually came into Las Galletas harbour while I was shopping. On another occasion we were celebrating a friend’s birthday in Los Abrigos when, around ten pm, we saw lights approaching. An orange rescue boat escorted a patera into the harbour, and the restaurant owners sent down bread and bottles of water for the exhausted people in the boat. We watched the whole drama from mere yards away – Police, Ambulances, coaches. The patera itself was a wreck, half-full of water and food scraps, and brightly painted with a hopeful face and a saint’s name which must have been the only things that got it safely ashore.
We heard of one patera that didn’t get here at all. The human traffickers pushed the boat out to sea with no engine and it missed the Canaries entirely. The passengers wrote pathetic notes to their families as they died one by one. Weeks later the patera ended up in Bermuda. I believe it started out with 50 on board – they found 11 bodies.

ISLAND WEATHER. We live on an island you can drive round in a day, and the climate is odd. It could be raining in our village and sunny a kilometre away. We have been standing on our terrace in the sun and watched a curtain of rain sweep towards us across the swimming pool. That’s microclimates for you!
Posted by liz young at 12:40