I am very late on parade this week with my 100 word story, but as this is officially Friday Fictioneers, and it's the birthday of our Founder Rochelle who hangs out at  https://rochellewisofffields.wordpress.com/   I shall use that as an excuse.
Also the fact that we sold our apartment yesterday and are now officially homeless might have something to do with it! In ten days we are returning to England, to a borrowed cottage in Sussex for a month while we look for somewhere else to live. Watch this space. 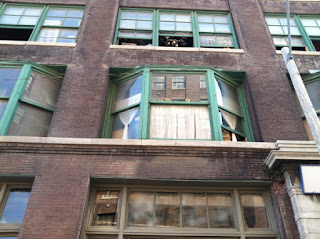 Romeo had persuaded Juliet’s friend to tell him where she lived, and now he was standing outside her tower block.
He pressed every buzzer but no-one would let him in – his accent marked him indelibly as an outsider - so he climbed the fire-escape, knocking on windows.
“Eff off, white boy,” was the least objectionable response, and he thought he’d never find her until, in a final throw of the dice, he stood on a landing and sang at the top of his voice, “Amore Mia!”
Juliet flung open her window, grinning, “Shut up, you fool!” and dragged him inside.“
Posted by liz young at 16:27