Late on parade again!
I've been a tad busy with the bureaucratic aftermath of selling property in Spanish territory, and we also handed our car over to its new owners, said adios to several friends, and checked that our money had arrived safely in England

Today I had just finished writing this when my daughter suggested a walk along El Medano promenade and a lunch of sardines and pulpo. No contest - blogging could wait!

For those of you who don't already know, Rochelle runs thie weekly Flash Fiction Fest from her blog https://rochellewisofffields.wordpress.com/  If you follow the Blue Frog trail from there you can read scores of other writers' takes on theis week's photo prompt.
After you've read and commented on mine, of course! 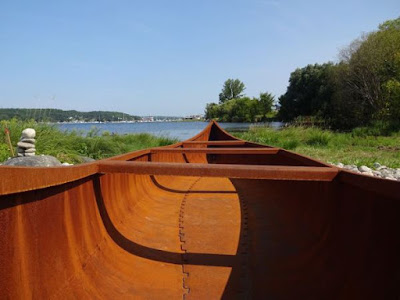 The Jeep lurched and Monty fought it to a standstill.
“Flat tyre,” he said resignedly, “Everyone out – you kids find me a flat rock to support the jack.”
Beside the wide, empty road Josh tugged the perfect rock out of a pile and Amy gasped, “You can’t take that – it’s Indian magic.”
“Don’t talk rot,” he scoffed, but immediately after the wheel-change Amy made him put it back.

“Heap of fuss about nothing,” Josh grumbled as his sister delicately replaced the top stone, but then a sudden rush of wind spread a layer of blood-red maple leaves around their feet.