I've been busy this week getting my Tenerife apartment ready to sell - (see my previous blog) - and it occurs to me that when we return to England I shall have to change the name of my blog!
But that's in the future, and in the hands of the gods, so here is this week's dose of Friday Fiction, prompted by a very weird photo on Rochelle's blog!
http://rochellewisofffields.wordpress.com/ 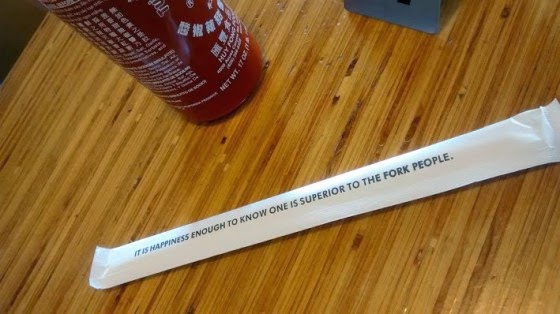 “Can Fergus come round?”

“I ain’t having a Collins in this house.”

“Winter ’39, so it was, and feckin’ freezing. Mam throws the ashes too wide and sets the stack ablaze, so I run over the fields to town while Pops bashes the flames, but they spread to the byre. Fire engine clangs along the top road, but Padraig Collins at the fork sends it down the wrong lane.”

“That was seventy-five years ago, Granda!”

“Two cows we lost that day – remember it like it was yesterday. No forking Collins is welcome in my home.”
Posted by liz young at 12:38 22 comments: Links to this post 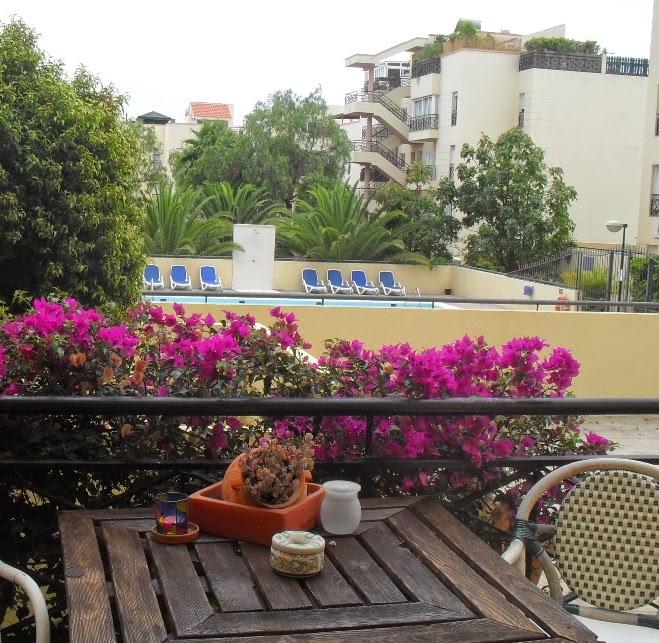 It's sad really - the end of an era - but we want to return to England, where we have several children and grandchildren, an elderly mother, brother and sisters - a whole family who we've only seen in snatches for the past fourteen years.

So we're hoping to sell up in Tenerife and move back to Sussex. There's a whole album of photos on my Facebook page, but here's a taster in case you're tempted to buy it! 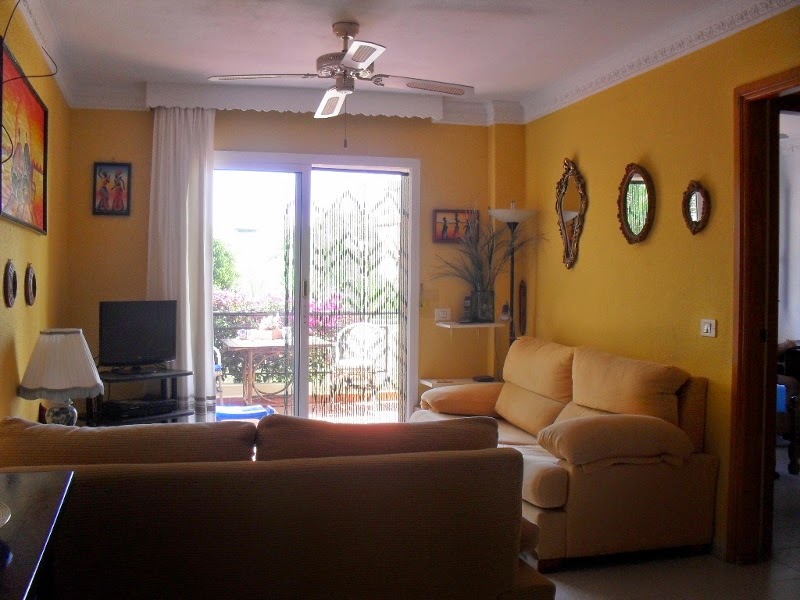 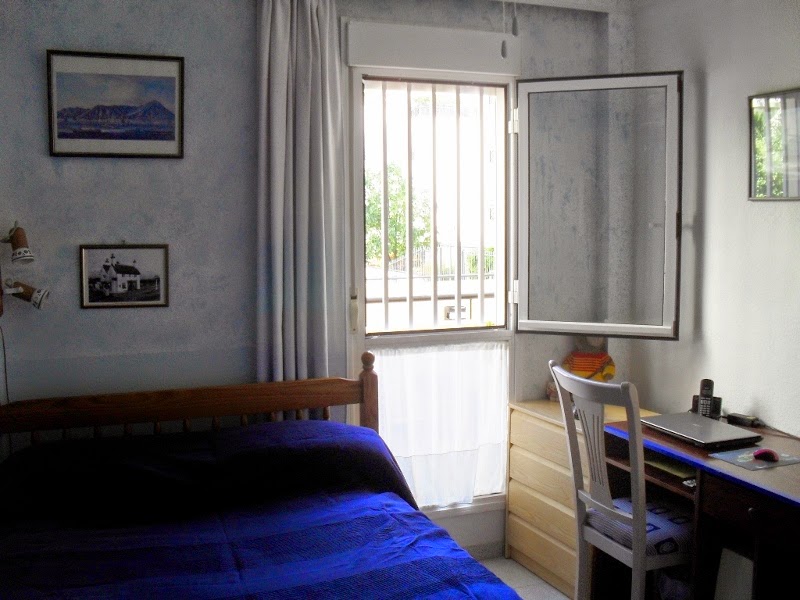 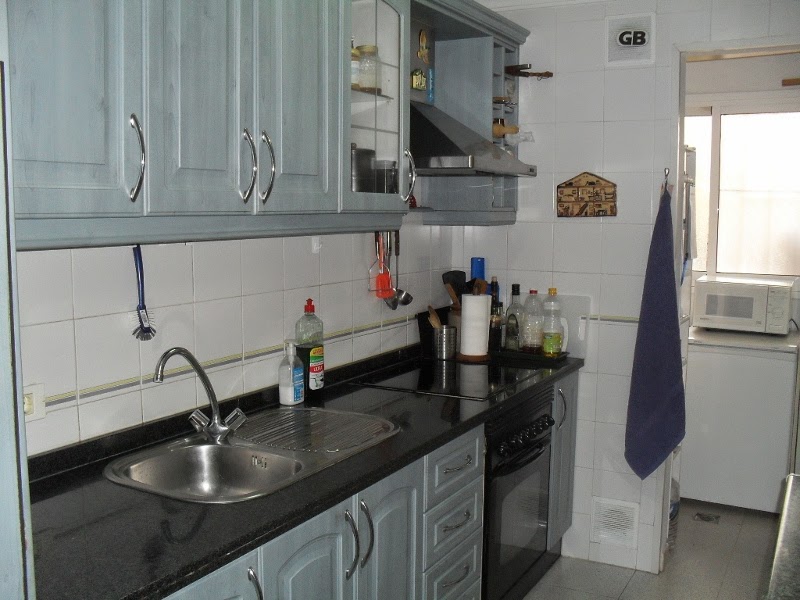 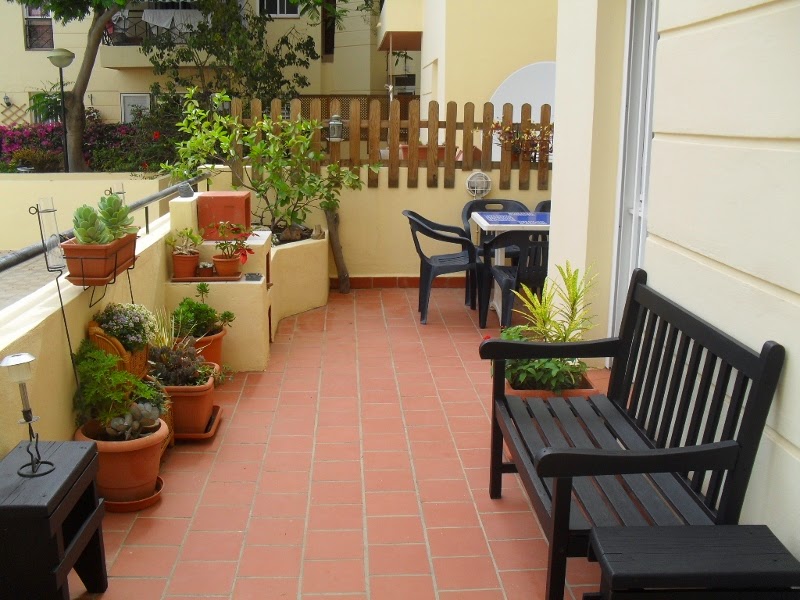 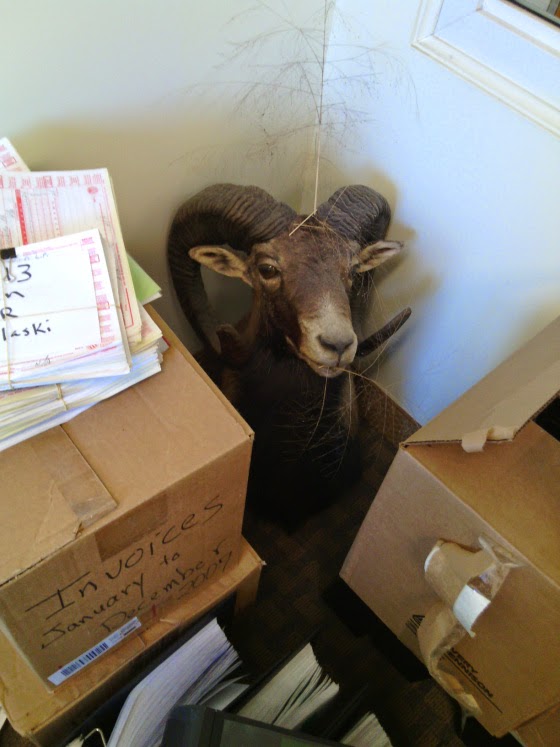 “He’ll go to school and get a decent job.”
Mama said those words as often as she said her prayers, and eventually Papa gave in, but he was never the same. I’d only been working in that office a year when he died.

Mama wanted to sell the farm and move to town, saying I would never get a wife to live out in the wilds, but the day I brought a sick animal to work so I could dose it regularly was the day Josefina agreed to marry me.


Now Mama is trying to stop her grandson milking the goats. 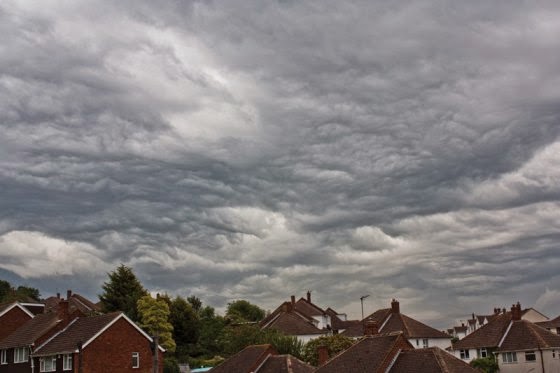 A CARD IN THE WINDOW

“A lovely morning, madam.”
“Not according to those clouds – give me a chicken breast, please.”
“This one’s big enough for two people.”
“But I live alone.”
“Then you should contact this lady who’s seeking a friend.”
“I don’t answer strangers’ advertisements in shop windows.”
“Strangers are only friends you haven’t met.”
“I will think about it, Mr Clark, but I must get home before it rains.”
………………………………………

“Madam! Where have you been all week?”
“I caught a cold in that rainstorm on Tuesday – why do you ask?”
“A lady who answered that advert was murdered – I thought it was you.” 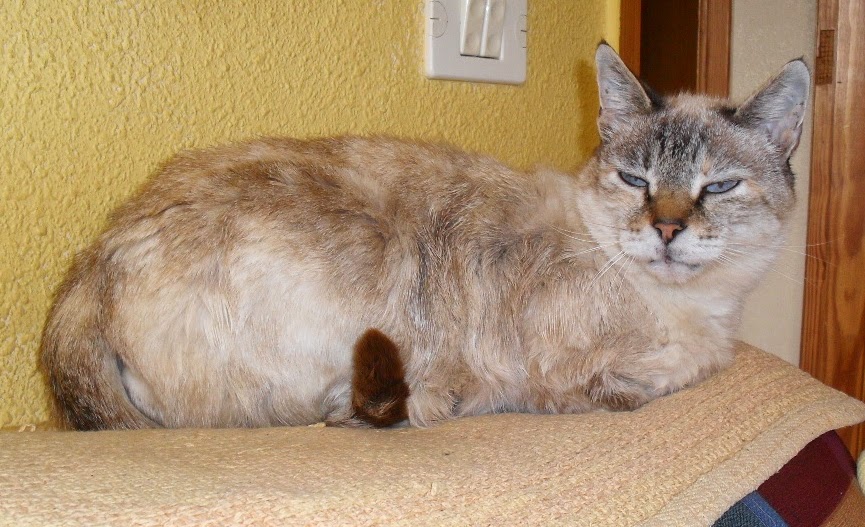 Kika died yesterday. We're not sure how old she was, but she had lived with us for thirteen and a half years. When we moved into our apartment in June 2000 we hadn't planned on having a cat, but Kika had other ideas.

It was the Sunday before Christmas 2000 and we had invited about 16 people for a full English breakfast. This was a tradition we started in England, where the numbers had grown to over 30 and had to be fed in relays in our tiny cottage.
For our first party here in Tenerife we planned to eat on the terrace, but it would still be a logistical challenge. 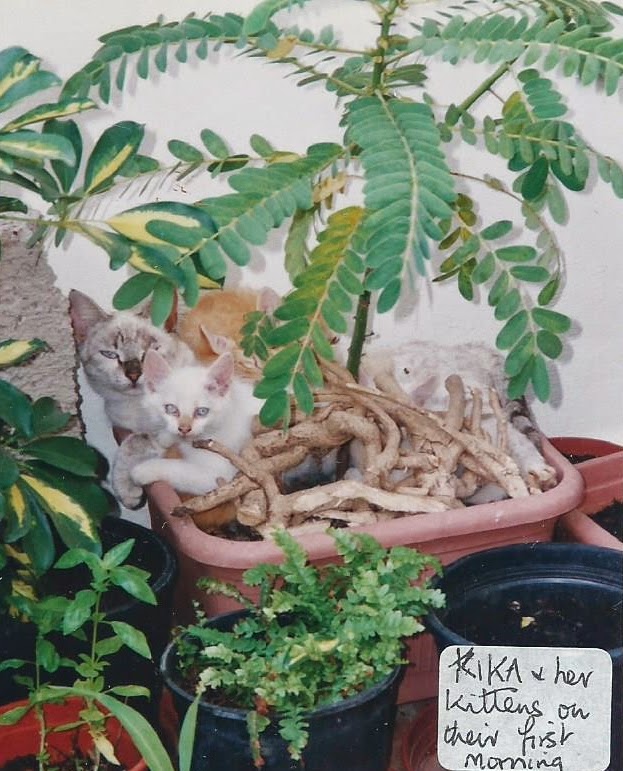 At four in the morning we heard noises outside our bedroom window, and when we investigated we discovered this beautiful cat had moved her four kittens into one of our plant pots.
There they stayed throughout the party - watching us while we watched them, but not moving. The mother cat graciously accepted smoked salmon, bacon and pieces of sausage - clearly she had been domesticated - but the kittens were wild and hissing. Even so, they were obviously not going to be deterred. 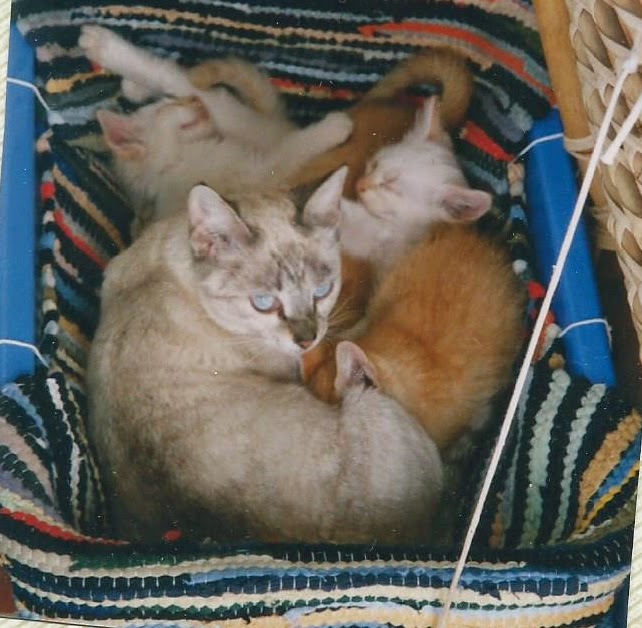 That afternoon - slightly merry - I made them a bed out of a washing basket and they moved in properly. 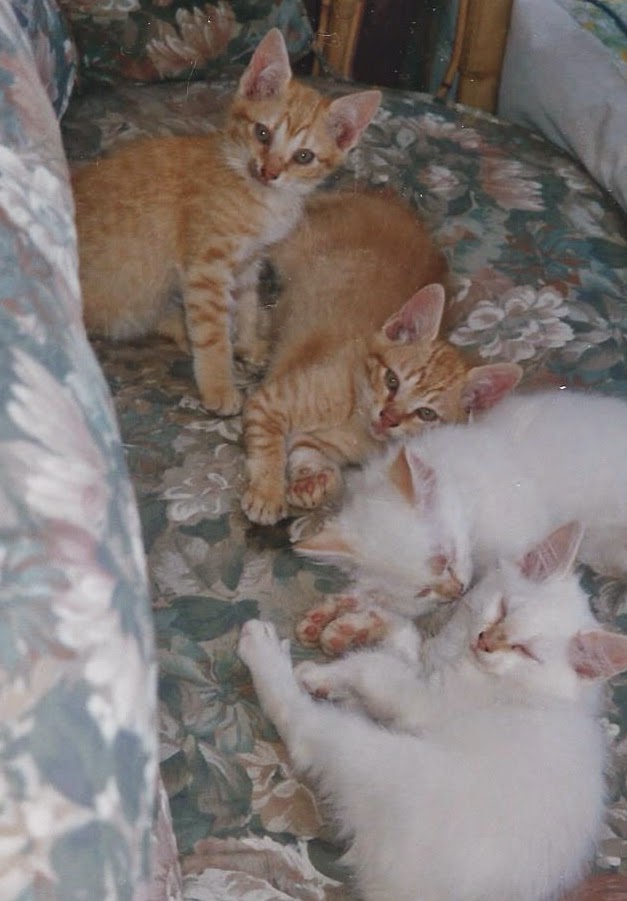 We knew we wanted to keep the mother and we called her Kika. She and her kittens all lived on the terrace, through rainstorms and the fireworks of New Year, and it took several weeks for Kika to persuade her brood to come indoors. She saw off an Alsation which thought it could attack her kittens, and came to us for help when she couldn't round them all up at once after a thunderstorm. We enjoyed their company for a month but then we caught and rehomed the kittens. 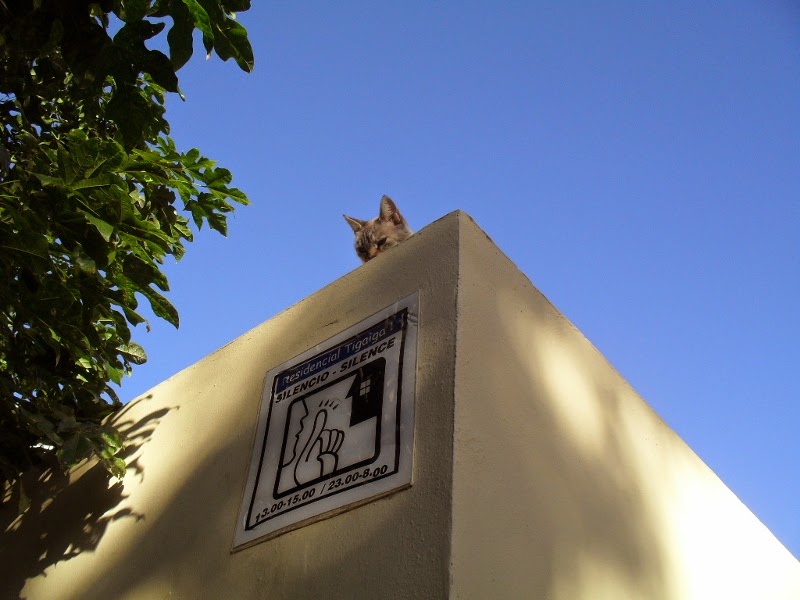 Kika stayed. She would wait on the wall of the pool for us to come home,
and then weave through the railing or turn somersaults on the path in front of us, 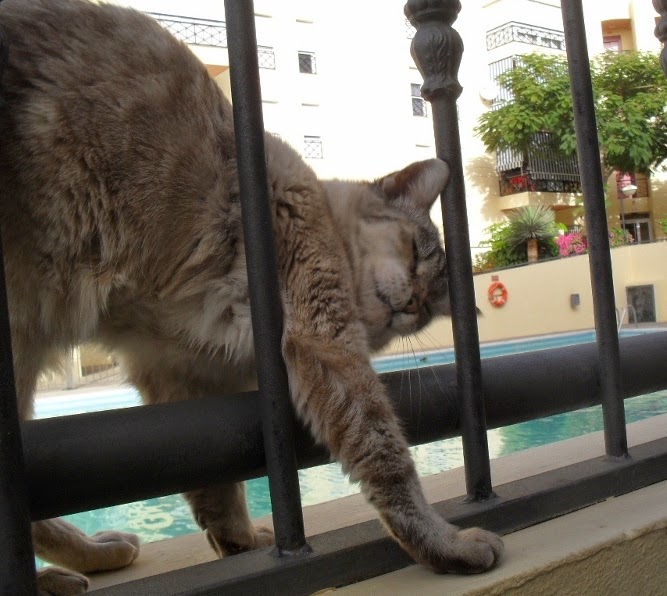 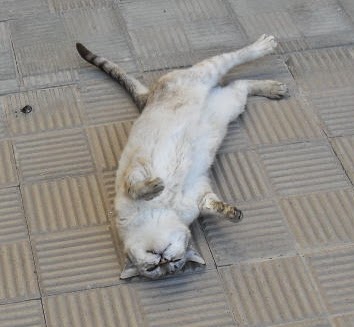 In her last few months she acquired considerable street cred by sitting on the steps of the local bar while we had a drink, and on one occasion she leapt onto the back of a passing dog, which fled in terror. 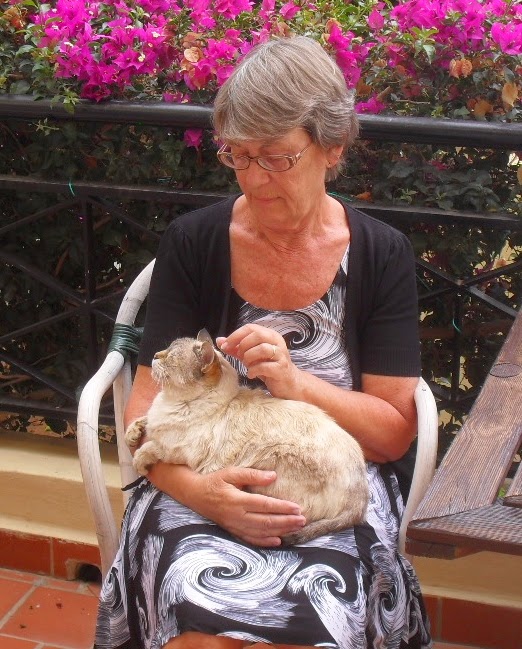 She was a lovely cat, a favourite with the entire neighbourhood, and we will miss her badly. RIP Kika XX 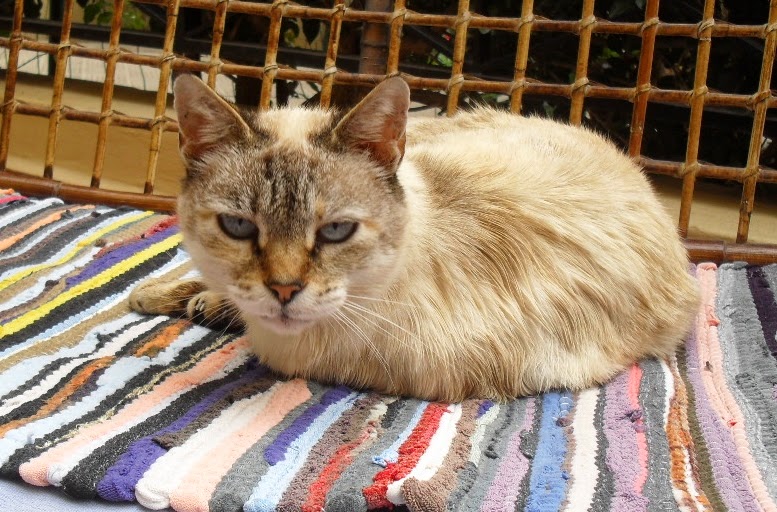 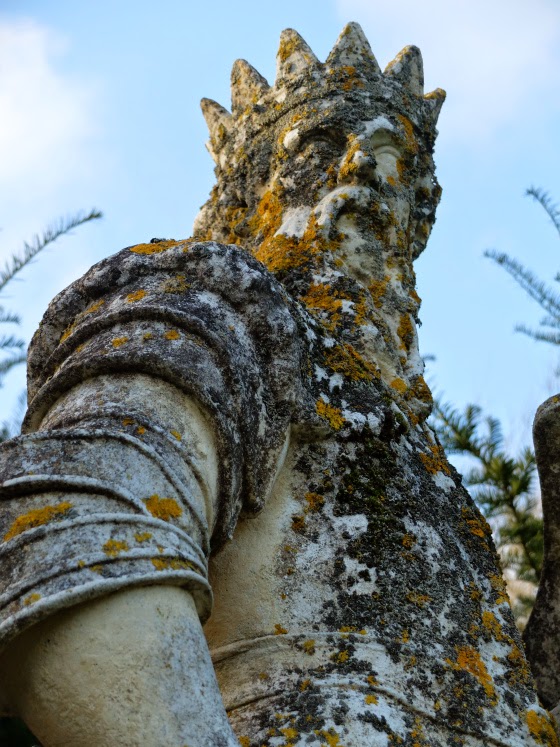 Edrun’s subjects loved him. His courtiers walked backwards before him, servants fought over scraps from his plate, and his retiring-room slave had amassed a sizeable sum by selling the contents of the Royal commode.

When Edrun ordered a statue, saying he desired to be remembered, there was consternation.
“Sire! You will live forever!” they cried, but he felt the growth spreading.

Edrun died a year after the statue’s unveiling and within a month his son had it removed.
Now moss grows on the statue and only pigeons see this reminder of Edrun’s reign – and of his mortality.