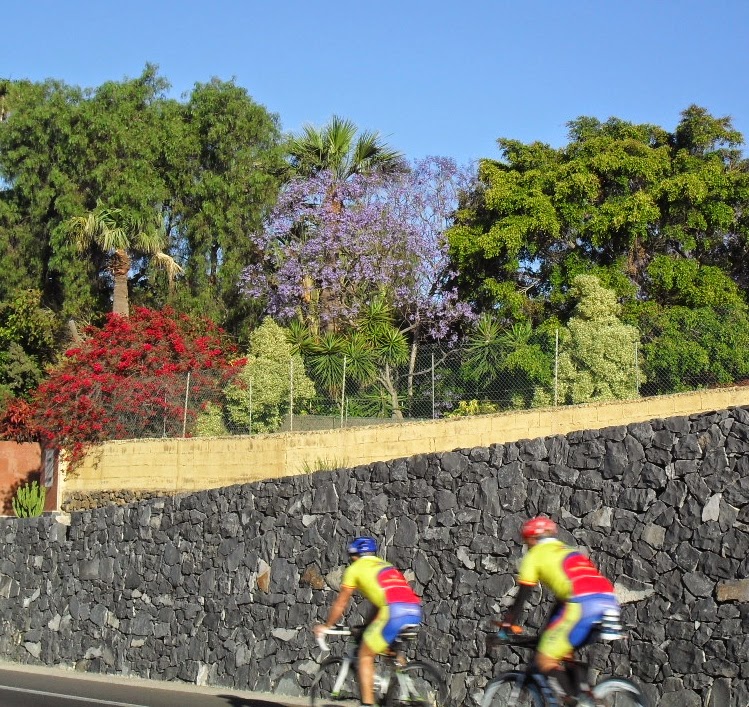 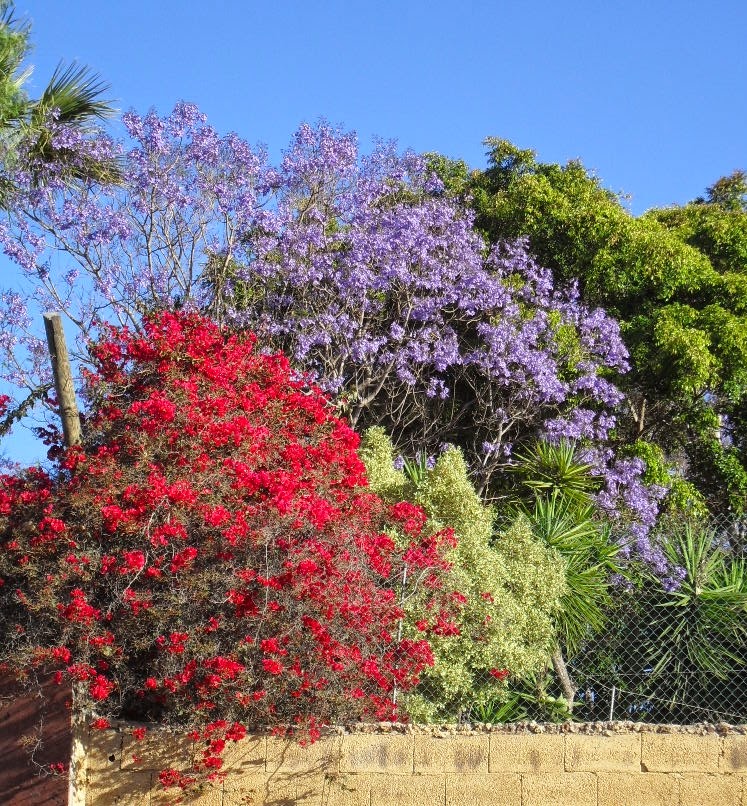 bouganvilla, ficus and jacaranda - a glorious splash of colour beside the road 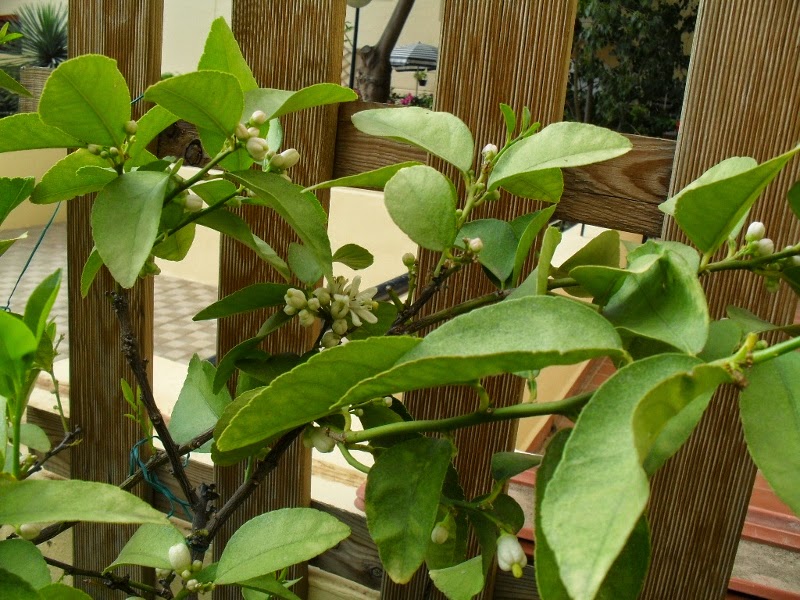 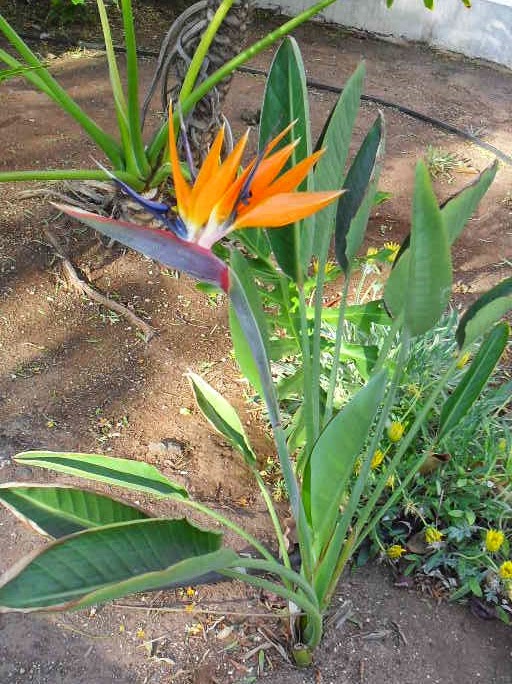 and of course, an estreliza.

JUST THE ONE - Friday Fiction

Friday Fictioneers is a group of writers who write 100-word stories prompted by a photograph posted each week on Rochelle’s site
http://rochellewisofffields.wordpress.com/
You can read all the other stories – free! – by following the link.

Here is my story - 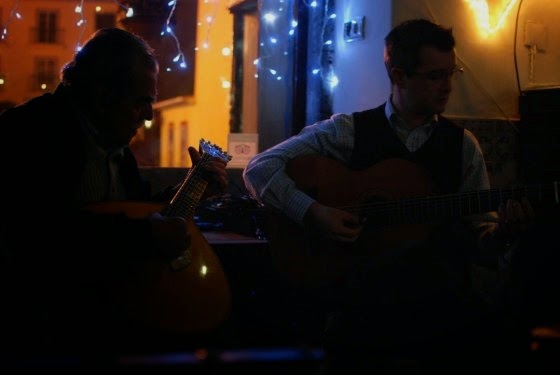 It wasn’t Kevin’s day to have Janie, but when he begged to be allowed to take her to the fair, Sue agreed.
After two hours of rides, Janie wanted to go home, but Kevin had heard the music from a bar.
He gave his little girl a fiver. “Get yourself a burger – I won’t be long.”
She looked at him with too-wise eyes. “You promised you wouldn’t.”
“You sound just like your bloody mother – I’m only having one.”

Thank you for reading - please leave a comment - and feel free to browse the rest of my blog.

Email ThisBlogThis!Share to TwitterShare to FacebookShare to Pinterest
Labels: 100 words, Friday Fictioneers, Just the One 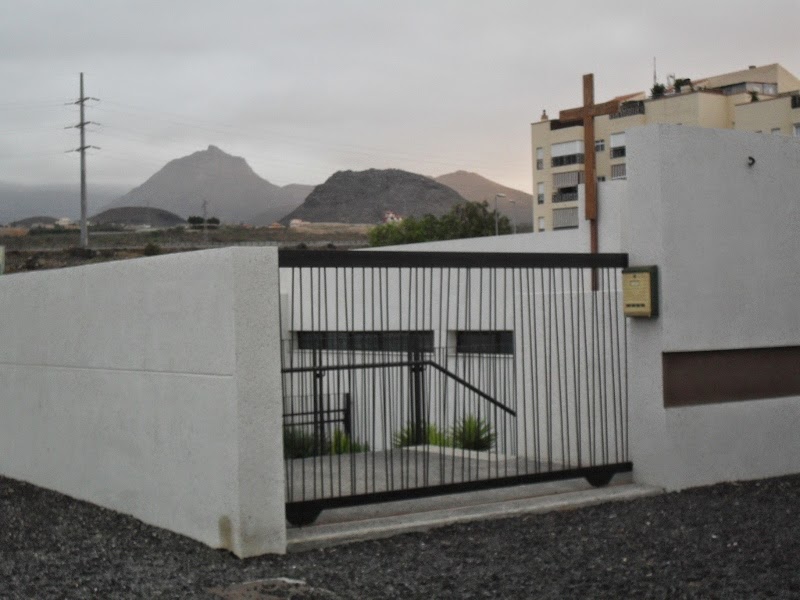 Did you go to church this Easter? If you did, bells probably called you to a traditional building with an altar, pulpit and pews. Perhaps the light streamed in through stained glass windows?

Spare a thought for the inhabitants of Parque de la Reina, Tenerife.

Several years ago, when the population of our pueblo had reached a certain level, a plot of land was designated for a church. A huge hole was dug for the foundations and a couple of hundred people congregated to witness the Bishop consecrate the ground. The oldest local inhabitant was given the privilege of placing a daily paper in the specially-built little vault with the official Obispal papers.

Then nothing happened. A while later the vault was quietly and unceremoniously removed, presumably with its contents, the foundation hole was filled in and the site abandoned to become a dog toilet.

More years went by and then another hole appeared in a different place and this building went up - or rather, down. We were going to have a church after all, and this is its basement.

That's it - a basement. A priest comes once a week and says Mass on the stage using a table as an altar, the faithful sit on stacking chairs rather than pews, and there aren't any windows or bells, but half a church is better than none.
Posted by liz young at 22:45 6 comments:

Friday Fictioneers is a world-wide online group of authors who write 100-word stories each week prompted by a photo posted by Rochelle - http://rochellewisofffields.wordpress.com/  You can follow the link on her blog to read the other stories.
This is my offering for this week - please feel free to browse and read my other posts. 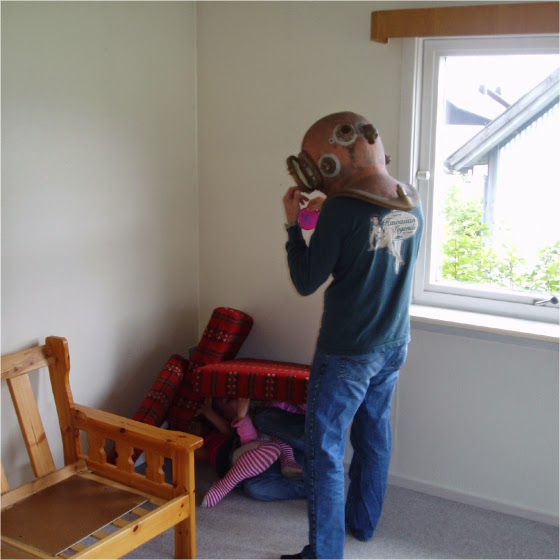 Dan took risks every day, diving on wrecks for sunken treasure, but the day he took the helmet round to show his sister he faced a hitherto unknown challenge.
Not that he knew that when he said blithely, “Sure – I’ll babysit.”

Dan was like a kid himself, building a camp with the furniture, but when he came face to striped tights with Polly’s rear end he recoiled in horror. Not even the sudden appearance of a giant squid had terrified him as much.

He grabbed the helmet. Valuable antique or not, it was the only way to deal with a smelly nappy.

OFFERING TO THE GODS? 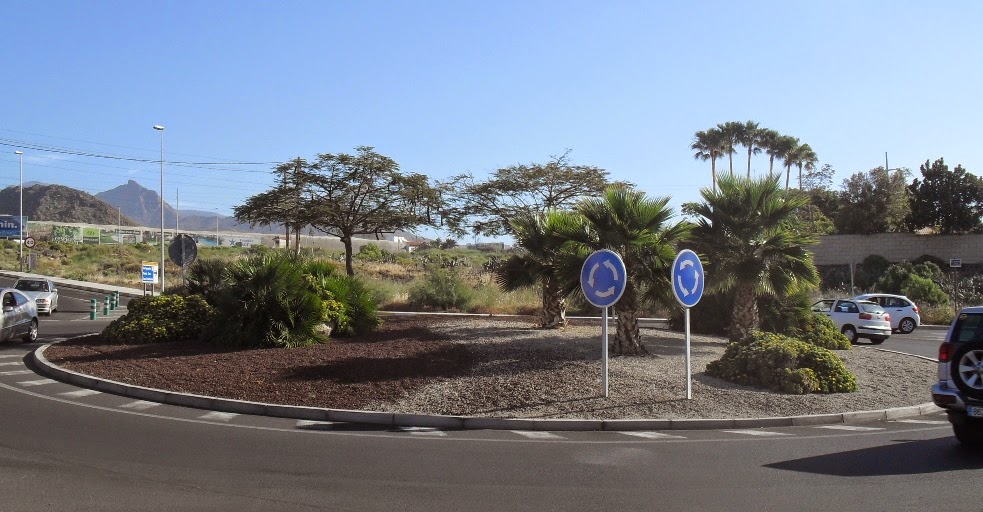 There's a roundabout in our village that I pass on my morning walk. It's as pretty as a little garden, but one road connects to the motorway so it's usually too busy to visit.
Then at the beginning of January, for reasons that now escape me, one Sunday morning I invaded the island. Beneath a palm tree lay a pile of fruit. 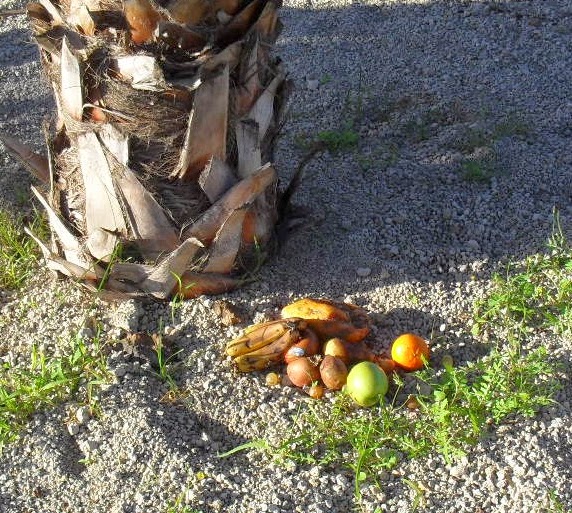 It hadn't just been dumped - you can see how carefully it was arranged - so I took a photograph, left it there, and walked away, wondering. Was it a child's school project - a study in decomposition? Some local ritual I hadn't heard about?
Or maybe it was an offering to the gods. 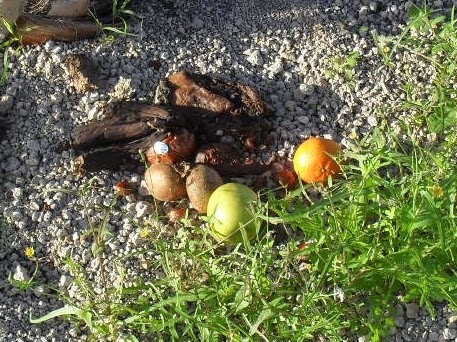 I checked every week - Sundays are quiet enough to cross the road - and a month later it was still there.
The weed had grown, the papaya had collapsed in on itself and the bananas were black, but the orange and apple were still fine. They were better preserved than the ones in my fridge. This is Tenerife, so I couldn't put their longevity down to freezing weather! 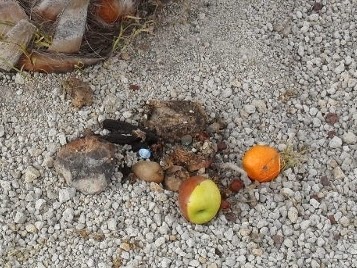 At the beginning of March the orange still looked whole, though I wouldn't have fancied eating it, but the apple was half rotten.
The oddest thing, though - someone had removed the weed and added a rock to the arrangement, but left the fruit undisturbed. 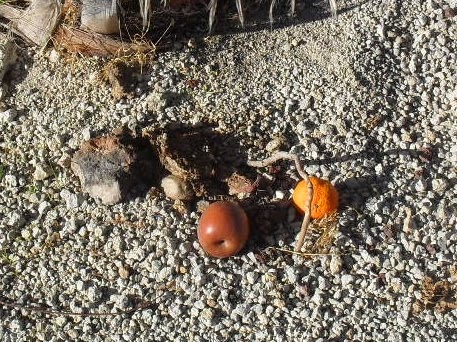 This week - three and a half months after I first saw it - the fruit has almost returned to nature, but the greatest mystery of all is that, on an island populated by millions of cockroaches, lizards birds and ants, I have not seen one insect anywhere near this offering.
Perhaps the gods are protecting it.

The people carried their Virgen in solemn procession through the isolated mountain village, the priest celebrated Mass, and then it was fiesta time. An enthusiastic band played, smiling adults wove the formal sequences of centuries-old dances, and joyful children shrieked and played. 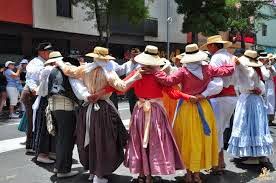 Later, Consuela presided over vast pans of paella, Jorge distributed liberal quantities of vino, and the mayor lit fireworks. They partied feverishly until moonrise, when suddenly there was nothing but silence.

The solitary hiker hoping for beer and tapas found only ghost-haunted streets, a pan rusted to holes, and bunting draped like icicles over a frozen plaza. 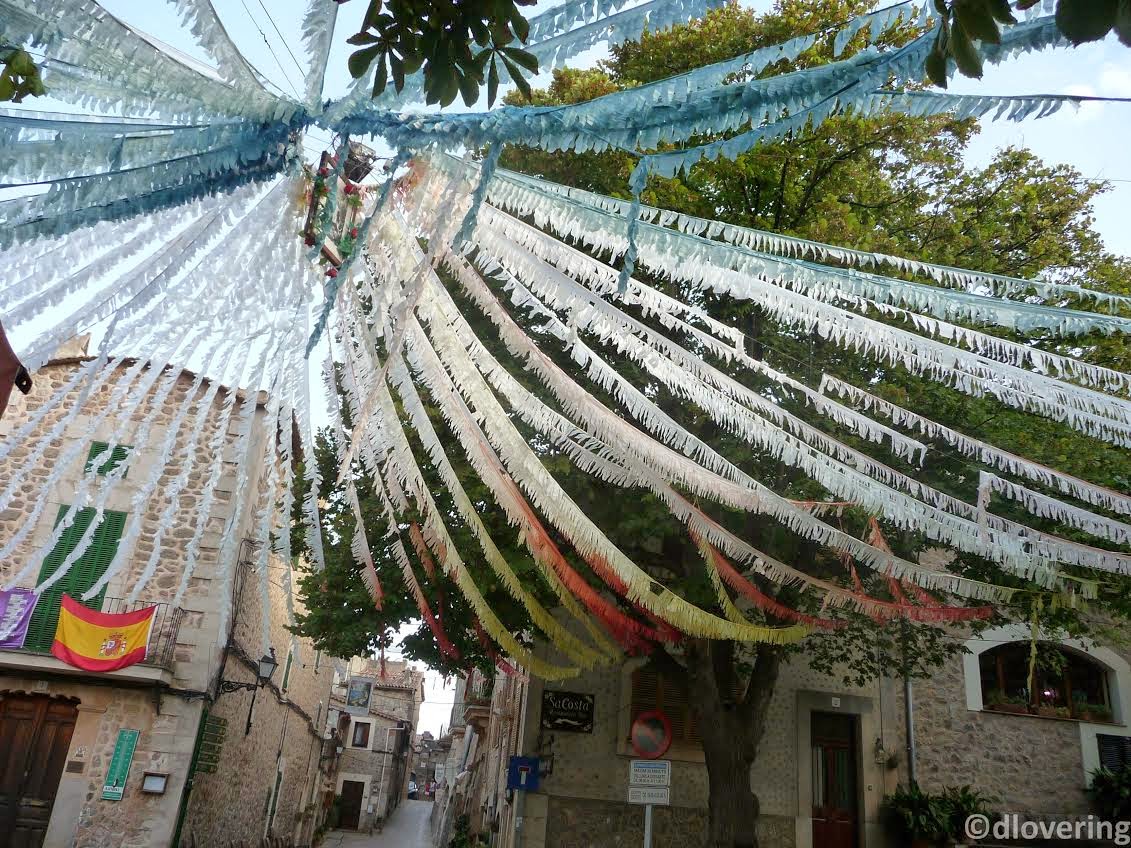 This second picture is the photo prompt from Rochelle's blog -http://rochellewisofffields.wordpress.com/
where you will find a link to more 100-word stories 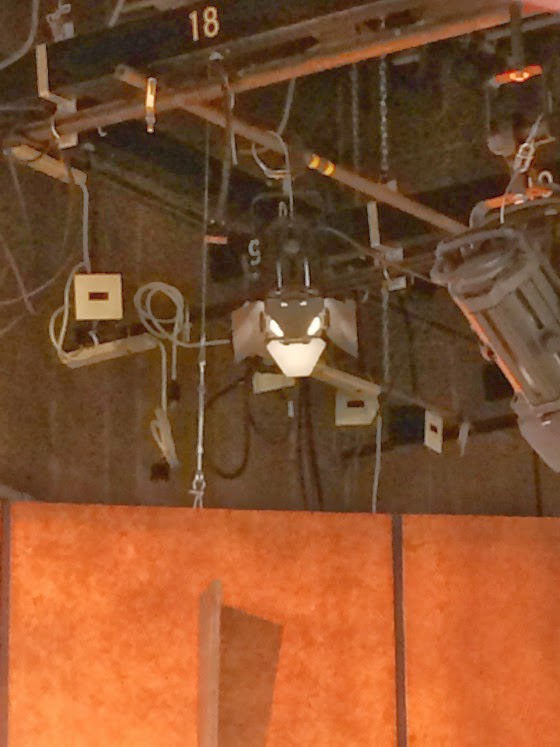 The alien clung to the beam watching as the creatures made the same moves and said the same words repeatedly, while others scuttled round changing the colours on canvas walls. Hunger gnawed but there were always too many of them. It waited patiently.

The next day one plump specimen was on stage alone and the alien saw its chance, but when it dropped beside it the creature whipped out a sword, cried, “Have at ye, ye varmint!” and pinned the alien to the stage.


I'm a bit late posting this week on Friday Fictioneers, but I only thought of this story today. If you would like to read the other entries for this week, go to Rochelle's blog:   http://rochellewisofffields.wordpress.com/ 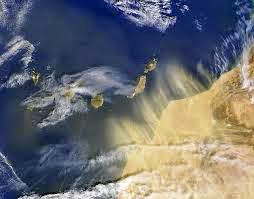 This is a satellite picture of a storm of sand blowing from the Sahara Desert and heading for the Canary Islands.
When it arrives it thickens the air with orangey-brown dust, raises the temperature by several degrees, and covers cars, terraces and plants with a thick layer that infiltrates the house and makes dusting a daily chore.
It clogs your nose and throat, restricts your breathing, and puts hundreds of vulnerable people in hospital.

Sounds familiar? In the UK you call it smog and it's a matter for headlines in the national papers.
Here we call it a calima and we get at least one a month.
And you think you've got it bad?