These two pictures appeared on the website www.newsinthesun.com this week - the young couple just escaped being crushed when tons of rock fell from a vertical cliff-face on the road from our village - Parque de la Reina - to the motorway on Monday 11th. Luckily the driver reacted quickly enough to swerve onto the other side of the road. 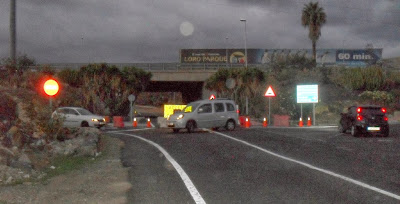 The Cabildo put a barrier across the tunnel, but failed to warn drivers leaving the roundabout in Parque de la Reina that they couldn't get through - 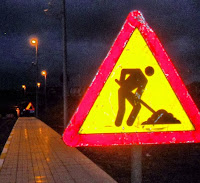 a Men Working sign and a Falling Rocks sign is not enough information. The traffic during the rush hours since has been chaotic. Cars wanting to access the southbound carriageway of the TF1 drive up, stop and look, and then do a three-point turn in the road and go back to find another route.

I walked up there again this morning and in five minutes I counted 23 cars, one truck and three motorbikes maneouvering to turn round.
Oh yes - and three near-collisions. 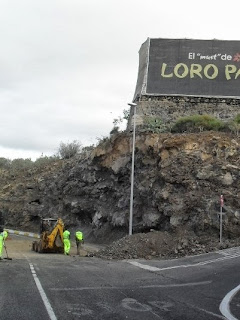 There were workmen clearing more of the rubble, but they couldn't tell me when the road would be re-opened - presumably the cliff must be made safe first, although the banana plantation worker on top of it didn't seem concerned as he chopped back cacti within inches of the edge. 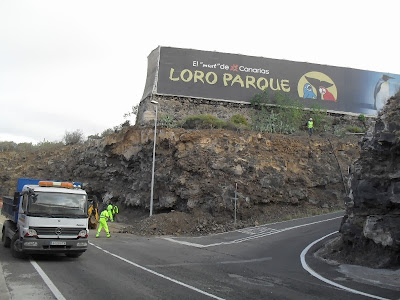