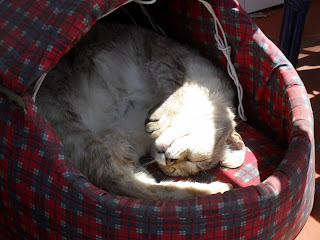 Here she is - Kika the little madam - catching up on her sleep in the sunshine after another night on the tiles.
Lucky for her she can sleep through the loud Italian party on our neighbour's roof terrace.
I could do with a decent kip as well, after the damn cat woke me - yet again - by miaoing outside my window in the wee small hours. 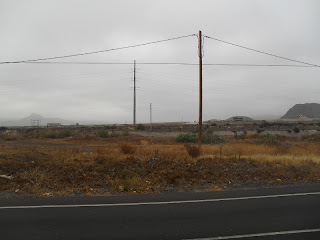 This was the sight that greeted me yesterday morning - behind those telegraph poles should be our mountain, but someone had pinched it. 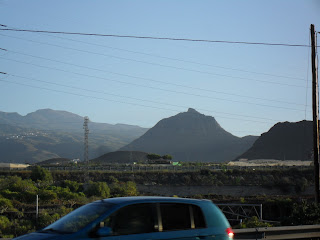 The sky was clear as a bell today when my daughter Mandy joined me on my walk. Not only that, but the pods of cyclists who rode past us all gave us plenty of walking room and actually smiled - it makes such a difference having a pretty blonde companion! 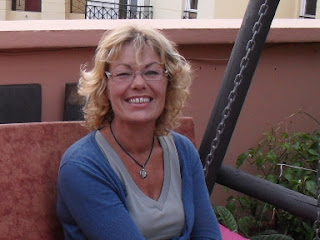 We are apparently going to have a heat wave later - it may even start tomorrow - so all cardigans and jackets can be washed and put away until autumn. Barbecues such as the one at which I took this photo have been banned to reduce the fire risk - we don't want a repeat of last year's disastrous forest fires. 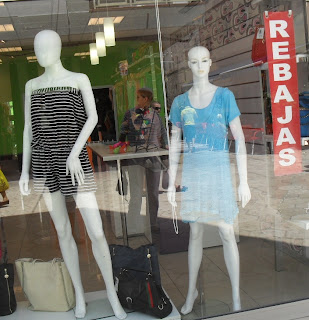 
Down in Las Galletas the Rebajas - sales - have started, and will  last all through July.

These summer dresses are selling for around ten euros each, which is great if your knees are good enough, but we were drinking our coffee opposite a very posh and expensive ladies' dress shop that displayed this sign.

The OH and I obviously have similarly twisted minds because the same thought struck both of us - they chose an unfortunate way to chop up the word DISCOUNTS!
Posted by liz young at 18:54