This is a calima. I took this photo this afternoon from the T-Gas station in Las Galletas.
Guaza Mountain in the foreground is only three kilometres away and murky, the one behind is maybe another two kilometres distant. Normally we can see them clear as a bell, and that faintly darker haze is an entire mountain range - buried under a blanket of grey dust blown over from Africa. 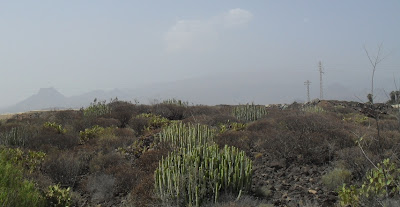 Mount Teide? It's in there somewhere, but the destruction of the delicate surface of the Sahara by trucks and four-wheel drive safaris where previously there used to be only camels means that we get two calimas a month rather than three or four a year. The hospitals fill up with asthma patients, the blanket of dust holds in the heat, and our temperatures soar to 50 degrees Centigrade.

I had to go up the mountain a little way yesterday to the Outpatients building at El Mohon, and looked in vain for the splendid view of our neighbouring island, La Gomera. See that line of cloud over the sea? that's where it is.
Actually, now I look at this photo more closely, you'll have to take my word for it that there is sea in the background!