How do you fancy flying in this replica of a 100 year old plane?
It is - or was - a Bleriot XI - named for the Frenchman who was the first to fly the English Channel. Or as they call it, La Manche, which is French for 'The Ditch' - who said the French were romantic? 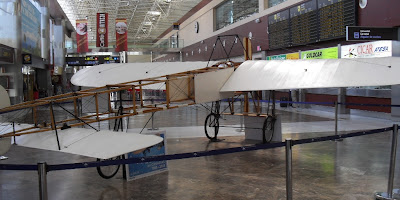 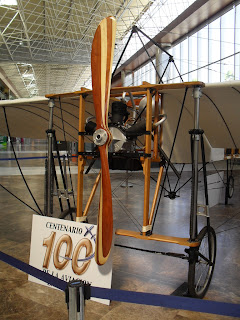 According to the Diario de Avisos, in 1913 another Frenchman, Leonce Garnier, brought his plane, his mechanic and his wife from Cadiz to Tenerife by boat in time for the May fiestas Probably hoping for a lot of Ron Miel!
He entertained the locals with demonstrations of his flying skills at Reina Sofia Airport until September, when he moved to Los Rodeos. The paper didn't say whether he flew there at his top speed of 73 kilometres per hour. Or whether he really only had bicycle wheels to land on.

I find it a little hard to believe that there actually was an airport then - it is much more likely that M Garnier used the flat bit of land by Montana Roja. After all, when I first visited Tenerife seventeen years ago there were only five check-in desks at Reina Sofia.
Times have changed and there are ninety now, which means there is enough space for them to exhibit a whole plane that has, again according to the newspaper, a wing-span of 7.81 metres. 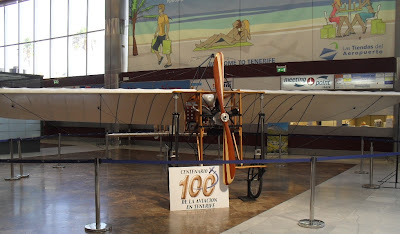 I couldn't get far enough back to get it all in - I was practically sitting on a car-hire desk as it was - but I really do recommend a visit if you're local or flying in for a holiday - it's gorgeous! 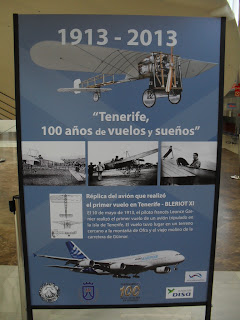 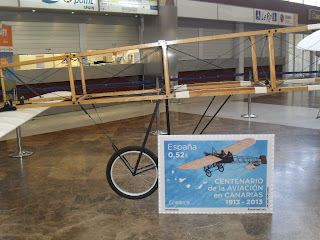