Something was moving across the path this morning, so I stopped. If I stepped on a cockroach I could subsequently walk its eggs into my apartment and, believe me, nobody wants that! 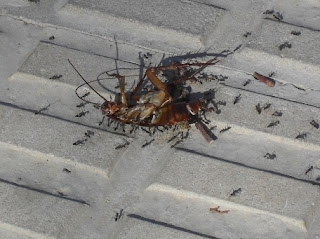 But this one wasn't scuttling - it was travelling slowly along on its back. I looked closer.


It was surrounded by dozens of satellites - a colony of ants was moving it from the car park to the garden - this cucuracha was breakfast. Or to put it another way - toast. 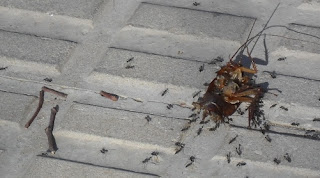 Quite why the ants decided to detach two legs and leave those behind remains a mystery.

A much prettier sight ten minutes later was this flower - 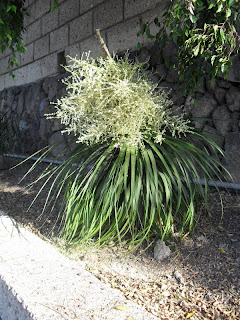 I think the plant is a variety of palm because the flower looks just like the precursor to the huge bunch of dates that at the moment adorns a tree outside our local bar. 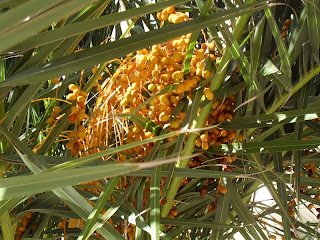 They aren't the kind of dates you buy in the shops - only the birds eat these, as one fledgling was doing right in front of my feet yesterday. Its parents were yelling, "Danger!" but it was far too intent on pecking at its date to listen - what do parents know anyway? 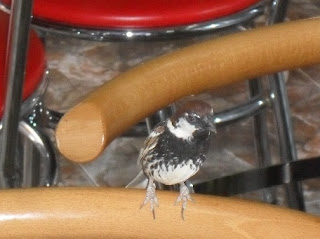 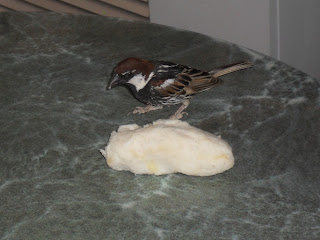 This little chap, on the other hand, knows exactly where his next meal is coming from. Every morning he flies into the same cafe in Las Galletas, perches on a chair and tweets.
'Un trozo de pan, por favor!'

Most people think of honey as that mixture of nectar and bee-spit produced by bees to feed their babies and subsequently stolen - sorry, collected - by humans.

On the Canary Island of La Gomera another kind of honey is harvested - Miel de Palma - Palm Honey. The raw ingredient is guarapo which is collected from the Canarian Date Palm by the bucketful and boiled to reduce it by 90% to a syrup. It is used in cooking, or drizzled over desserts, and can be useful medicinally, just like bee honey. It is highly prized in Europe and Asia for its flavour and high mineral content.
http://palmhoney.com/ 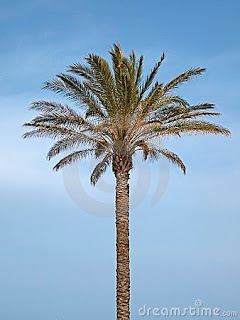 In the local paper today I read that the authorities are trying to make the Gomeron guaraperos stop using the word 'honey', claiming that word should only be used for the bee product.
The farmers say they have been calling it 'honey' since before the Conquistadores arrived - there is documentary evidence of this fact - and they see no reason to change the practice of centuries.
Quite right too.

There is no butter in peanut butter.
Laverbread is seaweed.
Lemon curd contains no curds.
Damson cheese is made of fruit and sugar.
Ginger beer isn't beer.
Soya milk doesn't come from animals.
... and there often is little trace of chicken in 'Chicken nuggets' or of fish in 'Fish cakes'.

Are the Word Police going after those products next?
Posted by liz young at 16:02 4 comments: 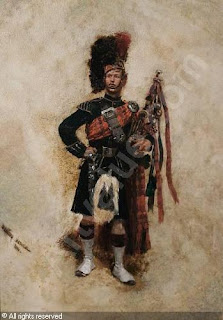 Rag, tag and bobtail
I have been reading a History of Scotland recently and discovered what may be the origin of this phrase.

Apparently in 1745 Prince Charles and an army of Scots arrived in Edinburgh, and were derided by some witnesses as “The oddest crew … with plaids, bagpipes and bare buttocks … a real rag, tag and bobtail bunch.”
My imagination supplied what they must have seen!

There was another sentence in this History that I particularly liked:
Graham of Claverhouse wrote a battle report to his boss in 1689 and beside his signature he added an apology; “I am so wearied and so sleapy that I have wryten this very confusedly.”


From now on, when I read over some complete rubbish I wrote the previous day, I shall be comforted by the thought that I am not the first to “wryte confusedly” when weary.
Posted by liz young at 17:49 7 comments: 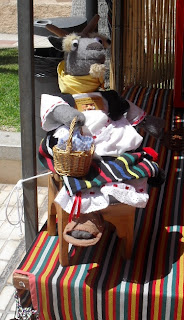 This little chap is supposed to represent El Torro wearing a traditional Tenerife costume. Only one thing wrong with that is that the costume is feminine, but hey! - it's a bit of fun.

Las Galletas in the south of Tenerife held an Artisans' Fair at the weekend, and as it's a ten minute drive from our home - and we had to go to the bank - we had a look round. 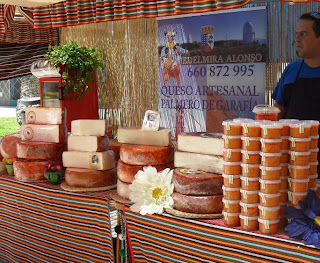 Every stall was draped in a length of the traditional peasant fabric and shaded from the bright sun with locally-made grass matting.

We bought some goat milk cheese ..... 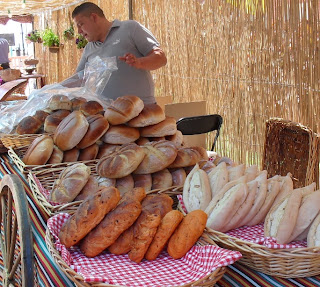 .... and some tomato bread and a huge teacake that will probably last us two or three days. 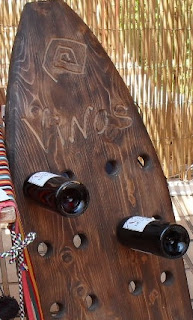 Someone beat us to the wine ...

.. this display board was once used to crush grain out of its husks. The board would be weighted with rocks and drawn back and forth by a goat, or weighted with children and hauled by their mother. 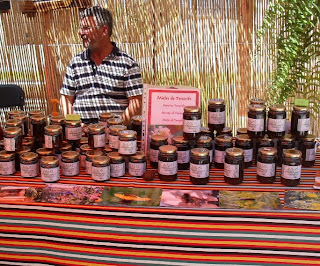 There was lots of local honey.....


.... and we could have bought any number of hand-made honey dippers or other kitchen tools ..... 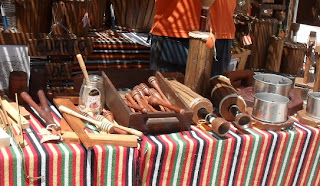 ....or even cigars rolled on a local maiden's thigh... 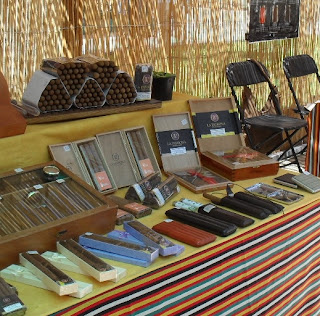 ...we already have a terrace full of plants ... 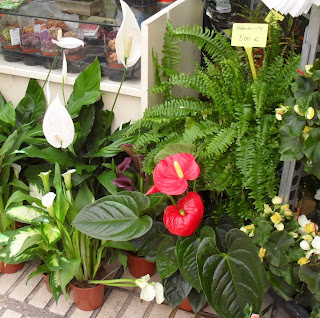 ..... and are way too old for the bouncy castle, but I did enjoy seeing its proximity to the statue of older traditions. 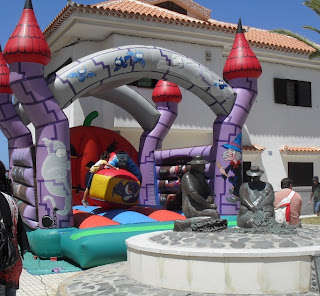 We saw at least half a dozen stages being set up, each with its loudspeakers, and no doubt the local populace stayed up all night partying.

We went for a quiet meal with friends in Los Cristianos and saw a sandcastle. 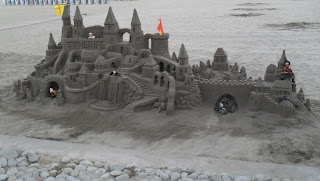 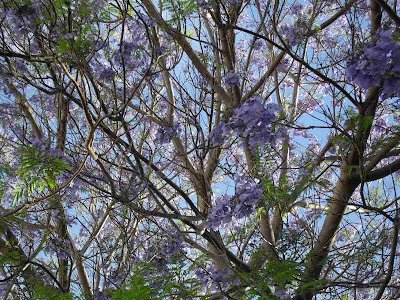 No, you haven't strayed back into Day Six of the AtoZ Challenge - I am simply taking advantage of the Spanish spelling to make a headline.

FIRST the FOTO
If you stand right underneath a jacaranda tree this is what you see - isn't it glorious?

FOLLOWED by the FINISH.
YAY!  I have reached the end of my re-write of HELTER-SKELTER which I began way back in March, when an agent said I could re-submit my novel to her when I had addressed some issues.
So I have tightened up the plot, cutting out scenes that, although I liked them, didn't move the story forward. I have written it more from my main character's point of view and cut back on the POVs of other people.
I've tracked down and eliminated repetitions, deleted people with absolutely no regard for how they might feel about it, and made the sex a bit raunchier.

I am a writer with no formal training in the craft, and the pages of advice from the agent were invaluable.
As was the help and support of the members of Talkback - the online writers' forum to which I belong. I have never met any of them in the flesh, but I feel I know them personally. A couple have even put aside their own work to comment on mine - a true act of friendship.

Today I had all 316 pages of HELTER-SKELTER printed at the Copy Centre in Los Cristianos - at €15.60 I considered it a bargain that saves over-burdening my own printer - and after a final read-through it will be time to get it professionally proof-read while I tackle the synopsis.

Then back to the agent.

One question remains - can I do all this with my fingers crossed? 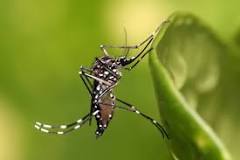 MOSQUITOS
I hate the little beggars - as far as I can see they serve no useful purpose. They're a damn nuisance at best and a positive danger at worst, and what they transmit can be lethal. There are plenty of other insects to fill any gap they might leave in the food chain if they were to be eradicated, and the sooner the better.
Now we in Tenerife have another reason to fear them.
Apparently the yellow fever mosquito - this one, Aedes aegypti, which can also carry 'dengue' - has already travelled by air to Madeira and Capo Verde. There were supposed to be airport checks here in January but as usual there was some sort of bureaucratic cock-up. There are reports that AENA - the airport authority - wanted scientists from the Institute of Tropical Diseases to take an airport safety course. What does that mean - do not walk in front of a jet engine? Watch out for carelessly thrown suitcases? Surely it doesn't take that long to learn what not to do?
We might get the checks this month, the paper tells us. Meanwhile - pass the mozzie spray!
Posted by liz young at 22:45 5 comments: