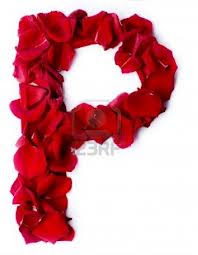 POPPIES There aren’t many left of the servicemen who fought in World War Two, but there are still servicemen and women being injured today. This is why the Royal British Legion in Tenerife supports the POPPY APPEAL.

There are only a handful of us – my OH is the Chairman – but 2012 was the fifth year we won the Noel Rogers Trophy for the overseas branch that raised the most money per member.
It helped that we were invited to sell poppies on the cruise liner Mariner of the Seas when it called into Santa Cruz. We were given lunch and a guided tour, including the bridge, before we stood in the sun for a couple of hours while the passengers re-embarked after a day ashore.
"Gee! Is it Veterans' Day already?" one American asked, and donated all his left-over euros. 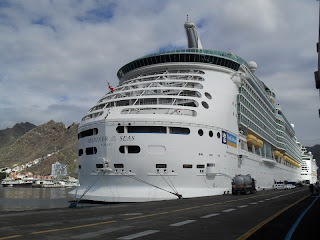 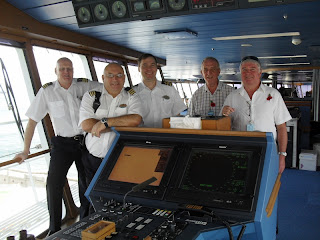 PICTURES
Only a few years ago I would have had to PORE over library books to find the PHOTOS I wanted to help my research. Now all I have to do is to ask the internet the correct questions.

Photographs of common people in the early 1900s were difficult to track down – only wealthy people could afford cameras then – but find them I did.
Such faces! Black and white or sepia are so much more evocative, aren't they?
On the other hand there were lots of photos of WW2, and those of Dunkirk beaches,with lines of men snaking into the sea are gut-wrenching even now. 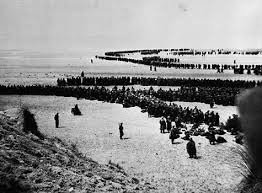 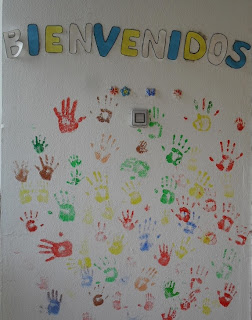 My local photo for today is of the nearest PLAYSCHOOL. Those handprints create a lovely image of a caring environment. Unfortunately, my friend recently found a toddler wandering in the street, and she discovered, after carting him round the local shops and bars, he had escaped from this Guarderia un-noticed. We can only hope they have taken this lesson to heart.
Posted by liz young at 13:15