WALLS AND A PITAYA 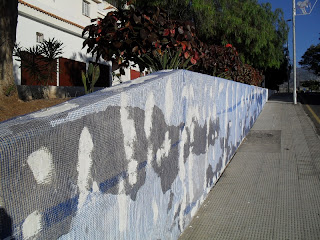 This wall is not, as you might think from its appearance, suffering from a strange kind of mould - it is undergoing renovation. In the UK a similar wall would be rendered with cement and painted. Not so here in Tenerife. They use a kind of plaster known as Panda everywhere. It covers a multitude of sins committed by the, for want of a better word that wouldn't be slanderous, builders.
A man and his boy have been chipping off the old Panda for weeks, presumably to make the job last as long as possible, and when they have a relatively level surface, covering it with blue plastic netting. This will form the base for a new coat of Panda which dries rather like interior plaster.
For the sake of the inhabitants of the complex who are paying for it, I hope they do a better job than we had on our building. When it was being re-painted the team repairing the cracks found all kinds of things stuffed into large cracks and plastered over, including bits of broken building blocks and crumpled cement sacks. One wall round a fourth floor terrace was totally lacking in metal bars and could have been toppled with a good push. The mind boggles! 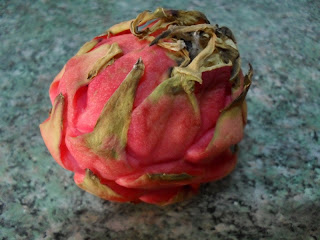 This fruit is so pretty that I had to buy one (only one at 5.20 a kilo!) and try it on your behalf - purely in the interest of science, naturally.
The girl in the shop tells me it is a pitaya. It's the size of an average apple, and looks like a cross between a pineapple and a globe artichoke.
Inside it is like neither. The juice ran like blood when I cut into it today. The centre is a magnificent purplish red dotted with tiny black seeds, with a thin outer layer of pink.The bland flavour didn't live up to my expectations, but it would make a startling addition to a fruit salad. 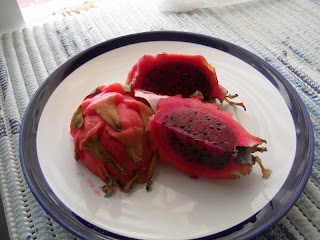