.... isn't just nigh - it's here!
December 21st 2012 - 21.12.12 if you're English, 12.21.12 if you're American. Maybe there was something signinifant in those numbers to the Mayans.
Of course, it is also possible that the 'experts' read the hieroglyphs wrong.
It's a great design though, and has been copied over and over in different forms, from jewellery to stargates, so the Mayans aren't forgotten.

On a cheerier note, and assuming we make it through today, here are two photos io my home-made Christmas tree as an online Christmas card to everyone. 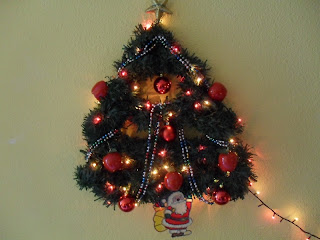 It's made from two wire coathangers, green garlands, baubles and a string of lights.
The first lot of lights died after a week so I had to unwind them and buy more. When I got them out of the box I discovered they aren't Chinese, they're Russian, and its took a firm hand to make the damn things plug into the extension lead. Still, they're flashing prettily now, and my tree hangs tidily out of the way on the wall. 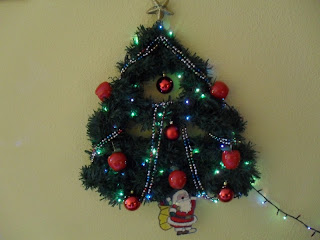 I would like to thank my fifty followers for finding my blog interesting enough to add their names, and a special thank you to those of you who leave comments. It is always lovely to get feedback - it reminds me I am not whistling in the dark!