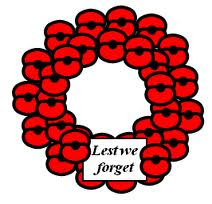 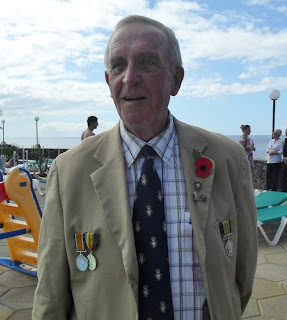 Branch Chairman Don Young, who did his National Service with the Royal East Kent Regiment "The Buffs", welcomed Senor Ricardo Melchior Navarro, the President of the Tenerife Cabildo - the first time we have been honoured by the presence of a member of the Spanish Government. 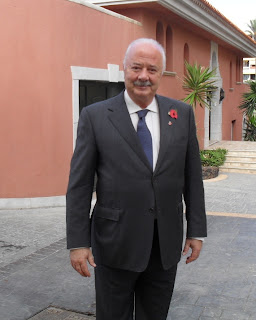 Rick Farmer, an ex-Royal Marine, led the service, various members of the Tenerife Branch read lessons and led the Intercessions, and I read the Act of Committment in Spanish - always a nerve-wracking two minutes - especially as the service was being broadcast over Coast FM.

Below is a photo of Rick with Kelly, our Poppy Appeal organiser, and Diane Grey, one of our members. 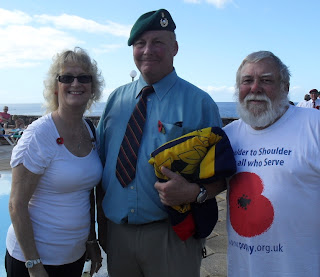 A lady trumpeter played the Last Post before the Silence, which on some occasions has been broken by an aircraft passing overhead on its way to Reina Sofia Airport, and then a few of us went very carefully down some dodgy steps to the rocks below the terrace and placed a wreath in the sea in memory of Servicemen lost at sea. 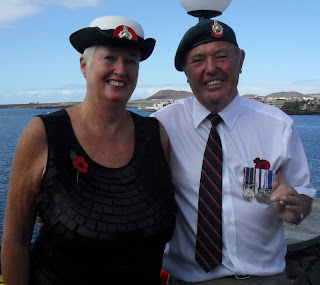 This is Mary, a former Wren, who read one of the lessons, and Earle, a former Royal Marine who was selling poppies at our local British supermarket all week.

There aren't many of us - we have a membership of 17 of whom half do all the work - but for the last five years we have won the Noel Rogers Trophy for the most Poppy appeal money raised per head. Last year our total was about 9,000 euros. 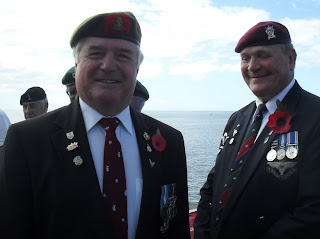 Paul Grey on the left of this photo is an ex-Army man, Vice-Chairman of the branch and Welfare Officer - everyone has to wear several hats with so few working members!

The superb venue and the great atmosphere draw a large crowd - it's impossible to count heads because once all the seats are taken there are people standing at the back, round the sides, sitting on the sea wall and beside the pool - but we printed 350 service sheets this year and didn't have enough. 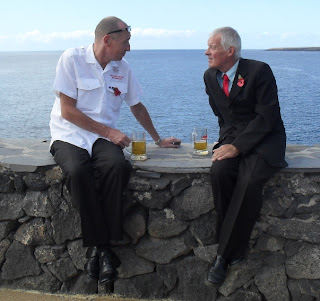 Afterwards, of course, there is time to relax with a pint, or a cup of coffee and a piece of chocolate cake.

The smile on my face might tell you how delicious the cake was! 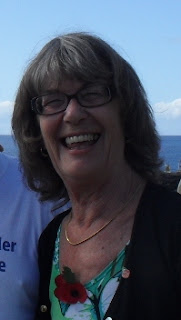