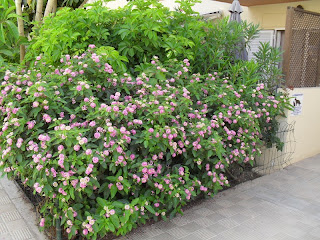 The heat might be making us wilt - what am I saying, "might"? - we are all trudging around with zero energy, but the plants don't seem to mind too much.

A little water and they're flourishing, like this huge lantana bush, which is about a metre and a half tall and two metres square. 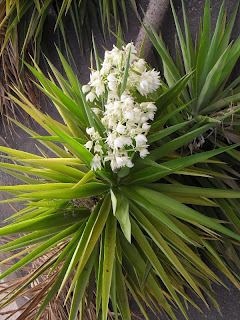 And the yukkas are flowering too - a lovely creamy spire of flowers that looks deliciously cool.

The estrelizias are beginning to flower as well. You have to be patient with these plants, because they take at least five years to reach maturity, but the flowers are spectacular when they arrive. 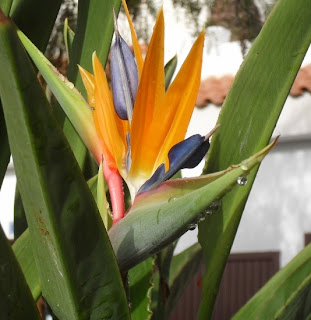 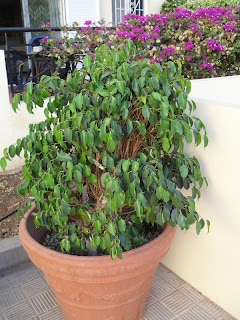 But the biggest surprise is our ficus tree. We had two that had outgrown their pots so we donated them to the community garden.The bed where we planted them already had some tall palms, put there by the community, that had grown from ten feet to forty in no time at all.
A few weeks ago there was water leaking into the pool pump room below, endangering the pump and - which was much more serious - the electricity meters for the whole block. Someone had got it wrong and planted palm trees in soil only two feet deep.
The roots had nowhere to go. Result - catastrophe! 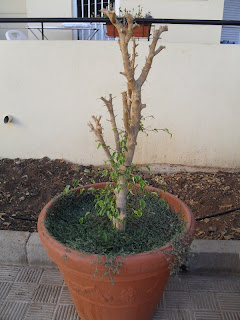 So the palm trees had to go, plus the garden with its watering system, and we were told that our two ficus would be moved to large tubs.
An elderly man and his teenage helper arrived to do the job - probably someone's relatives, knowing Tenerife. The ficus were literally torn from the ground and shoved into their new pots - I had to ask for their poor roots to be covered with soil before they dried out in the fierce sun.
They felled the palm trees and chopped out the thick roots just in front of our terrace, so we had a splendid view of their routine - two minutes of work by the man followed by fifteen from the boy. "I'm teaching him the job," the old man said.
Our ficus started to wilt so I watered them - no-one else seemed bothered whether they survived or not. One flourished and one died.
Or so we thought. This week, despite the searing heat, the "dead" one has burst into life again. Viva el ficus!