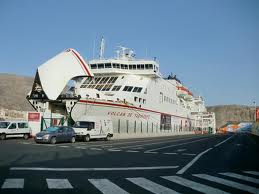 You may remember I have blogged several times about El Hierro, the smallest of the Canary Islands that recently had an undersea volcano erupting two kilometres off its coast.
They have been struggling to survive ever since. The fish stocks have dwindled or fled the contaminated sea, decimating the income of the fishermen. Diving schools, that are another main source of income on the island, were also badly hit, though they are recovering since the ban on approaching the now quiet volcano has been lifted, but their economy is still fragile.
It wasn't helped when the ferry company Armas announced it would no longer be going there because the route was losing money. 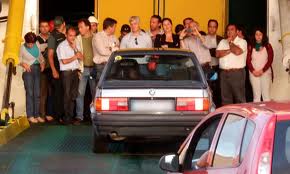 So last week the Mayor (whose name is Armas, oddly enough) and fifteen other El Hierro politicians took matters into their own hands and prevented the ferry from loading. Eventually the boat sailed. The Captain radioed ahead to say he had "several stowaways on board." and asking for the Policia to meet the boat. The politicians were referred to in the press as "Piratas". They seem to have talked their way out of being arrested - politicians are good at that.
Someone arranged with Fred Olsen to take the abandoned goods to El Hierro in one of his ferries, and he began talks with the Canarian Government about taking over the route. 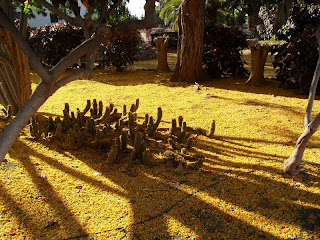 Surprise, surprise! Armas Ferries have now decided they might be able to see their way clear to operating a service after all.

The yellow tree I commented on three days ago was buzzing this morning. There must have been a bee on every twig and the ground underneath was bright yellow with fallen blossom. I wonder what the honey tastes like?

And this is the latest photo of the cactus, with my hand to demonstrate the scale of the bud that is growing fast. 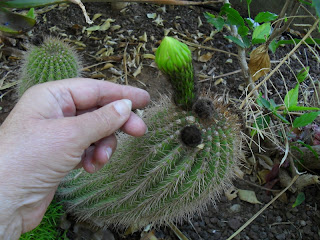