SUELTA/ RELEASE OF A TURTLE 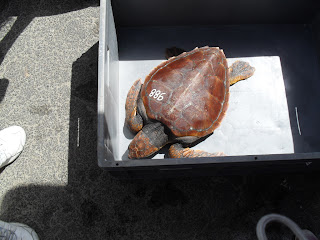 A turtle released on my birthday!
We drove to El Puertito this morning to see a turtle released. Many are rescued from the sea, injured by propellers, tangled in discarded fishing nets or lines. Not all of them are as lucky as this fellow. There was a display board of graphic photographs beside the van that brought two turtles - look on my Facebook page to view the album.
We waited ages - this is Tenerife, after all, where the manana syndrome holds sway! There were children in the sea, and huge German sunbathers lying at the top of the slipway, oblivious both to the spectacle they made and the nuisance they were creating - the release route was that way..We watched in disbelief as a female TV photographer edged down the slipway with a huge camera to take shots of the waves. She was wearing a pair of those droopy-nappy pants, which aren't attractive at the best of times - filled with air by a stiff breeze, they were ludicrous. How she didn't lose her footing on the seaweed is a mystery. A child dropped her drink which rolled down the slipway and her Mum got a round of applause for rescuing the bottle from the waves. The tide was coming in and several people misjudged their dash round a path over the rocks and got soaked. The sun was hot and the spray was cool and it was my birthday and it was all part of the entertainment.
Then we had the speeches, and the expert said that the waves were too much for the turtles to manage. The bigger turtle would be released from a boat, and the smaller turtle would wait until a better day. We thought they were probably stressed enough after ages in the van and the interminable photo-calls, but presumably the experts know what they're doing.
So some divers waded off the beach with the lucky turtle in a plastic box and lifted it over the breakers. There were cries of "Ai mi madre!" from a hundred spectators as the box nearly overturned. Then one man swam backwards towing the box and waving for the cameras - his five minutes of fame - and they hauled it onto the platform at the rear of an orange dive-boat. A moment later, with no ceremony at all, they tipped the turtle into the sea.
Let's hope it makes it. 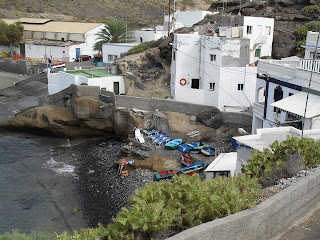