These poems are unashamedly sentimental - You Have Been Warned!

Each poem is based on one of many soft toys owned by my family, all the way from Betty, who is mine, to Ragman who belongs to one of my grandsons. I drew illustrations and made each of my children and grandchildren a copy a few years ago. When I had finished I was at a loss as to what to do next, and that was when I started on my first novel. 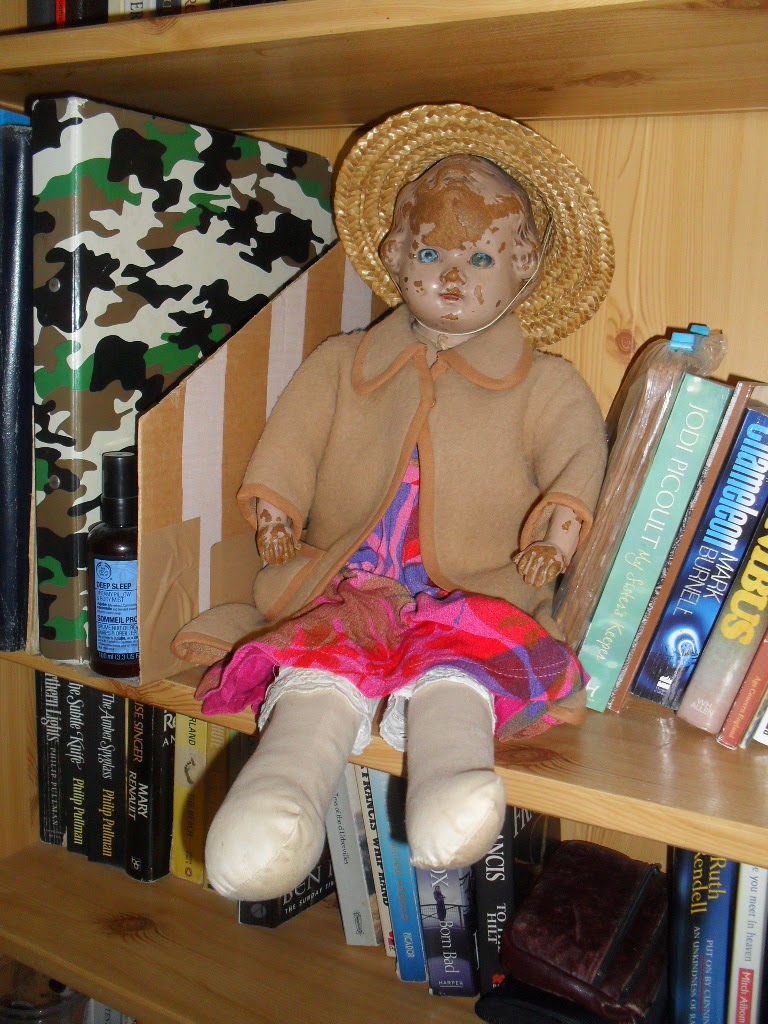 Betty is Australian,
Betty is a doll,
she didn’t study opera
or become Ned Kelly’s Moll –
she went to
in nineteen-forty-four
to live with Baby Lizzie
in her house by the shore.

They played out in the sunshine
under the kumquat trees,
or on the beach on a rug to keep
the sand off Baby’s knees;
they saw kangaroos and parrots
and gum trees on their walks,
and snakes, and grapes, and lots of flies,
so they wore hats with corks!

They sailed away to
when Betty was just two,
past , Africa, , and
the Bay of Biscay; through
from summer sun to winter –
it was all strange to eyes
used to eucalyptus trees
and wide Australian skies.

But there were woollen gloves, and snow
and crumpets on the hearth,
and, in the springtime, daffodils,
halfway round the earth --
so Betty became English, though
years later, when she went
back home, the eucalyptus filled
her soul with long-lost scent. 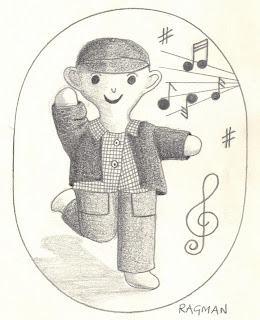 RAGMAN
Ragman's ears stick out like handles
underneath his cap,
they pick up the notes of music
that make his feet tap.
When the others are all sleeping
through the cat-flap goes
this little man in checks and denim
with the nimble toes
to dancing class to learn the latest
steps in jive or tap -
music is what keeps our Ragman
such a cheerful chap 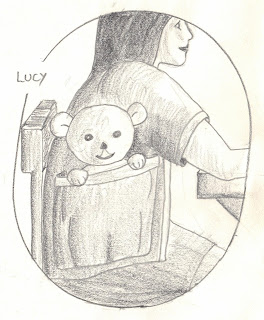 LUCY
Lucy was a little bear -
no two ways about it.
"I'm not happy being small!"
every day she shouted.

Then one day she went to school
hidden in Debs' pocket -
no-one noticed her all day -
small was just the ticket.

She stayed quiet and learned a lot
and became quite clever -
then she knew that being small
was the  best thing ever. 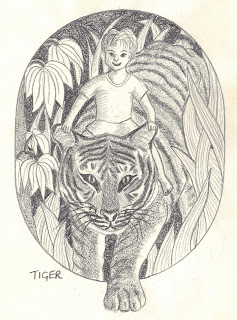 TIGER
Tiger's enormous
and covered in stripes -
if I'm tired I can ride on his back -
and I know that I'm safe
because Tiger is fierce
so we're never afraid of attack.

We go to the jungle
some nights when we're dreaming,
pacing the green forest floor -
if an animal thinks
he can eat us for dinner
Tiger frightens it off with his
ROAR! 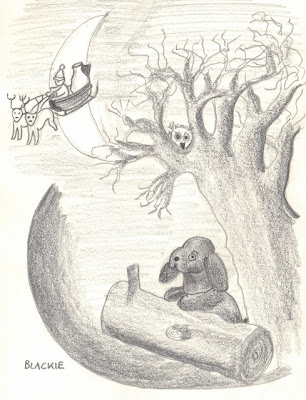 Blackie was lonely and lost and cold
out in the woods in the dark -
the wind in the trees was making a noise
that made him afraid to bark.

So he set off to find somewhere warmer and safe - up to his tummy in mud
he crept through the grass past the cows as they lay sleepily chewing the cud.

A fox trotted past looking for his next meal and gave him a terrible fright -
the owls and the bats were out hunting as well - he was scared on his own in the night.

Then down from the sky swooped a sleigh full of toys and a white-bearded man dressed in red
who picked Blackie up, and the next thing he knew he was snuggled with Debs in her bed. 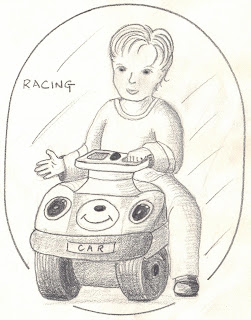 In my yellow racing car I can go so fast -
round the sofa, through the hallway, no-one can get past.
Hidden in the storage box underneath the seat,
I've got several passengers and something nice to eat.
Down the garden path and take the hairpin by the gate,
then the long curve round the pond and on into the straight.
Make a pit-stop for refreshments by the potting shed -
off again, but Mummy's calling - must be time for bed. 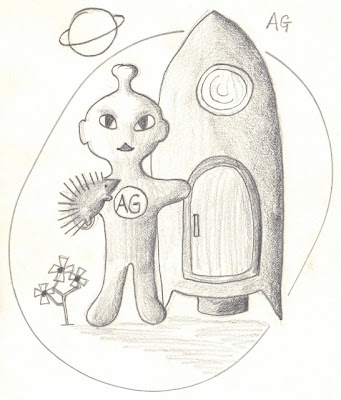 Ag the spaceman bought a rocket to escape from Mars
where he couldn't find employment -  headed for the stars.
On and on he flew for ages, eating purple flowers,
cuddling his orange hedgehog through the lonely hours.

With his blue and white computer Ag was very skilled;
learned the language in one night and studied his new world.
He and Dan wrote travel stories, published their own mag -
-azine, and made a lot of money -  Super Spaceman Ag! 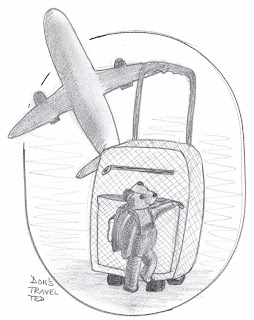 Donald, on a business trip,
Packed his suits and socks
And pants, pyjamas, shaving kit,
His toothbrush and some books.

When he unpacked in his room,
Out onto the bed
From a hidden inside pocket
Tumbled Travel Ted.

Trav had stowed away in secret
When he saw the case -
Loved the thought of visiting
Some strange, exotic place.

Just a blur on airport x-rays,
No-one had suspected
Trav was in there, without passport,
Wholly undetected!

They shared them on the balcony,
And took a photo home
To show that even in
Don was not alone. 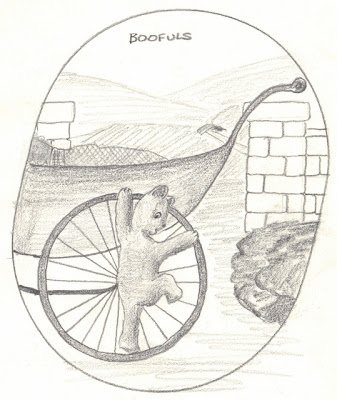 Mandy was sleeping, Boofuls was bored
and hot and cross, and so
she climbed from the pram and jumped to the ground,
where she wasn’t supposed to go.
Out of the garden, under the hedge
and into the fields she went,
then over a bridge, across the stream,
where her nose detected a scent.
Lavender flowers as high as the sky
perfumed the summer air,
and she played for hours, then went home at last,- a lavender-scented bear 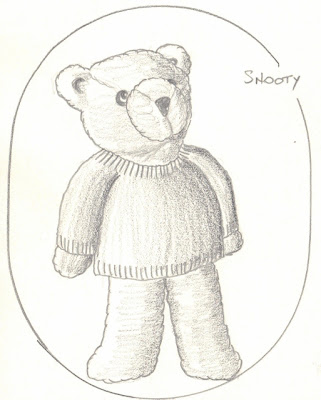 
Grandad Don when he was little
didn’t have a teddy bear;
it was wartime, and his Mummy
couldn’t find one anywhere.
A fluffy dog was all he had
to cuddle when he went to bed
or when he fell and hurt his nose,
which was OK,  but not a Ted.

Then when he was all grown up,
one birthday morning he arose
to find he was the proud possessor
of a Ted with turned-up nose.
This superior Ted looked as if
all the world around him smelled
of something really most disgusting -
‘Snooty-Bollocks’ he was called. 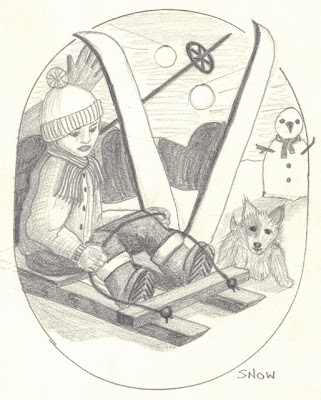 
We prayed for snow that winter, which Daddy said was silly,
because he drove a car to work and his way out was hilly.
But never underestimate the power of children’s prayer,
for Tuesday morning when we woke, snow was everywhere!
So Daddy couldn’t get the car to work - (he phoned instead) -
and from the loft produced his skis and our old wooden sled.
Wrapped up warm we played that day till all the light was gone,/ then ate hot baked potatoes snug and warm at home. 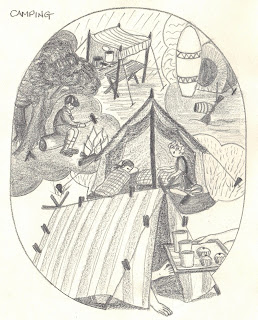 In we camped by the seashore and played in the surf on the beach -
Cornish icecream was delicious but Cornwall took hours to reach.

Four tents in a field with the Youth Club were totally swamped by the rain,
and dinner won’t cook when it’s stormy, so we broke camp and drove home again.

John, with the Cubs in the forest, used rope and some wood to build bridges -
they sat round the fire eating bangers, singing songs, but got bitten by midges.

Mandy and Debs went to Guide camp and ended up covered in spots -
they both earned their badges for camping despite getting bad chickenpox.
But at home in the garden, with bamboo and an old sheet that Mum tied on tight,
we camped in familiar surroundings and slept in our own beds at night. 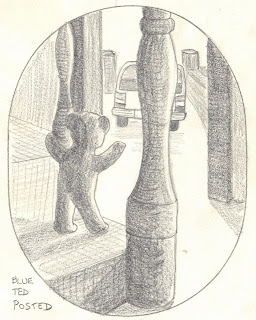 Blue Ted went visiting with all the family
one summer’s day in the car;
Daniel played cricket
and John won at skittles, while
Blue sat indoors on the stair.

Teatime was over, and Daniel was sleepy, so
off they went, but forgot Blue.
What a calamity!
Nothing could comfort him,
no-one could think what to do.

They parcelled him up with brown paper and string
and posted him off the next day –
he’d never slept
without Daniel before, and so
once he was home, there he stayed.