BOTTLING UP - Flash Fiction in 100 words

As a break from packing boxes and photographing furniture to put on a local For Sale site, I wrote this little piece of flash fiction for Friday Fictioneers. Thanks to Rochelle for the photo that prompted me and dozens of others to write a weekly story.
Follow the Blue Frog link on her blog to read the others.
https://rochellewisofffields.wordpress.com/ 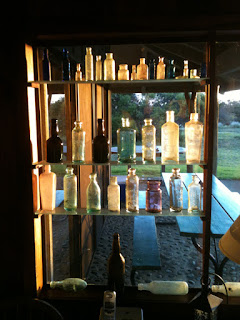 Vinnie began collecting glass marbles when she was small, loving the way they changed the sunlight into magic.
When she started earning pocket money she progressed to old medicine bottles, and by the time she met Dean she had hundreds.
‘Stupid’ he called them when he was sober – when he was drunk he simply broke them, often on Vinnie’s head.
She began seeking out the murky ones in flea-markets, washing them out meticulously when she got them home.