“We have a son! I will teach him to be a good carpenter.”
“Are you sure? I know you promised but . . .”
“Hush, wife – I meant every word – now sleep.”
She lay back on the straw holding her son to her breast and slept until voices woke her.

“Find another shelter – my wife’s just had a baby.”
“We know; we were told to come – we’ll leave the flock outside.”
She moved her veil aside to show the child, and weathered faces worshipped while his baby hands bestowed blessings.
“You’ve seen him,” Joseph said, “Now leave us in peace.”
“We all wish for peace,” they said and departed, leaving a lamb behind – mother and baby snuggled into its warm fleece and were comforted.

Later, more visitors came, rivalling the star-shine with their gifts, and as Joseph hid the treasures from thieves his last doubts vanished - Mary’s story of an angel was true.

That night Mary woke weeping. “I had a dream,” she sobbed into Joseph’s arms and he said, only half in jest, “Not another one!”
“I dreamed he was sold for thirty pieces of silver.”
“Our son will be a simple carpenter, wife – who would sell him?”

There's no 100 word challenge this week, so I chose a story that I wrote a year ago in response to a different forum's challenge to write 200 words inspired by the word SILVER.
The photograph I have used is of the crib at Reina Sofia Airport in Tenerife, where I live.

Thank you for reading my blog, and for the lovely comments I have received over the year.
I WISH YOU ALL A HAPPY AND SUCCESSFUL 2015. 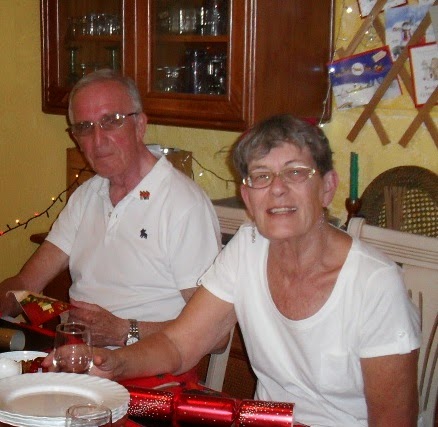 We had a lovely Christmas Day - drinks with friends at the local bar followed by dinner with my daughter and son-in-law.

We had a lot to talk about - we're hoping to move back to England next year and they plan to retire early and grow potatoes in Ireland!

We shared the cooking, ate our starters on the terrace and retired there after dinner for more drinks by candlelight. Next year we hope to be drinking our brandies by an open fire. 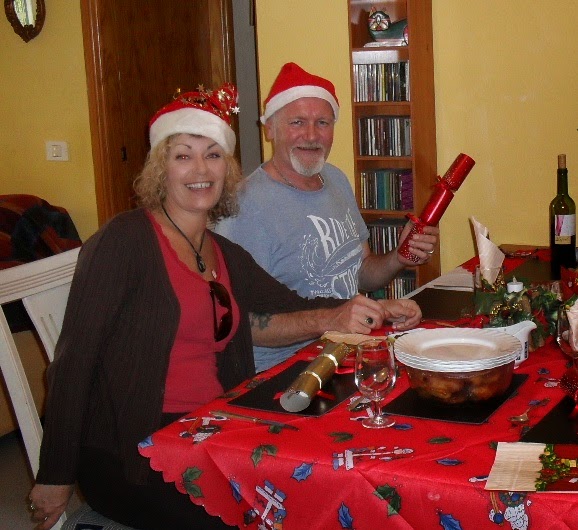 On Boxing Day we caught up with the rest of the family over thousands of miles thanks to the miracle of Skype, and then we ate a Mexican supper with Venezuelan and Italian friends - a truy international Christmas. 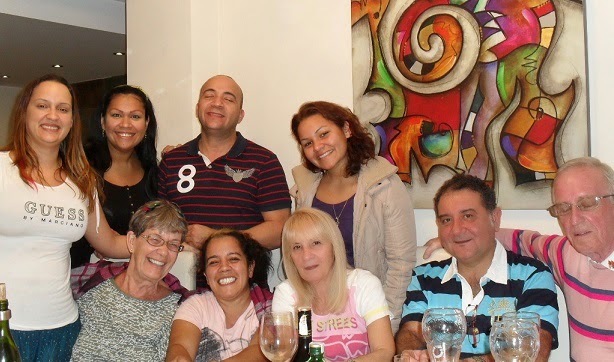 And now life can return to what passes for normal in our neck of the woods. First I must post this week's 100 worder for the Friday Fictioneers - see http://rochellewisofffields.wordpress.com/ for the link to other writers. Then I shall send off the short story I wrote for a competition over the holiday, and finally return to the rewrite that seems to be taking forever!

If you're still here, thanks for sticking with me, and I wish you a happy and successful 2015.

My story follows this lovely photo taken by a fellow Friday Fictioneer Bjorn Rudberg, and if you'd like Christmas stories, read my post for 30th December - "Stable". 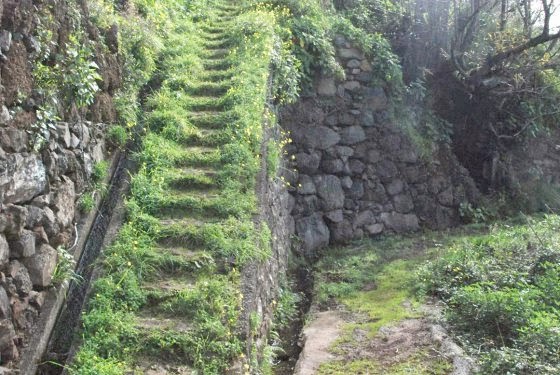 The tsunami didn’t care that Felicity was a celebrity and Maria a servant – it swept them both off the terrace. Maria clung to a tree, holding Felicity with her strong old arms, until the next wave dragged them away.
As they stood in line for the golden stairs Felicity said, “You can’t come this way, Maria – use the servants’ entrance.”
In a little cove Maria discovered the worn steps of her childhood and ran lightly up them, straight into her mother’s arms, and at the gates she heard Felicity desperately demanding; “I’m a celebrity – let me in here!” B4911
They marched past the citizens in proud ranks, their armour polished to a shine even the General couldn’t fault. The only sounds were thousands of feet hitting the ground and the rustle of the watching crowd. Glancing left, B4911 saw his brothers and sisters waving and stood taller.

The General called a halt at the upper level and spoke.  “Troops! On this momentous day you have nothing to fear. The ancient records say that we are the only species able to survive a nuclear blast.” 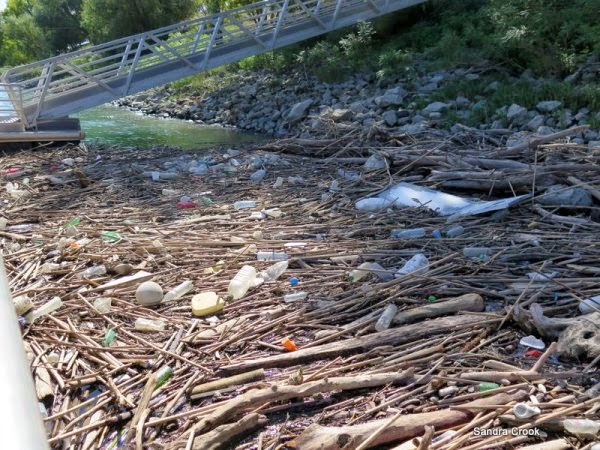 “Marry me, Hanna,” Yakob begged daily, “And we will make many beautiful babies.”
Yakob had dark, expressive eyes, but he was only a fisherman, whose hut crouched on the beach with its roof weighted by rocks. Aaron was ugly, but he would inherit his family’s bar.
“Build me a house first,” Hanna said, “And I’ll think about it.”
Then a storm spread Yakob’s hut all along the beach, and Hanna searched frantically through the debris until she found him.


I'm back after a lovely fortnight in England visiting family. We stayed with my brother in the country - log fires and wine every evening - and helped my mother to celebrate her 90th birthday with a posh pub lunch of pheasant pie.
The OH popped down to Folkestone and saw most of his family there, while I spent time with my children and grandsons - and saw, via the modern miracle of a scan, one of my two grandchildren who are due early next year.
I also had to buy a new laptop, which my elder grandson helped me to get started on, and today my brother-in-law installed Word for me - isn't my family wonderful?
So here I am, at last, able to return to my blog with a 100 word story inspired by a photo prompt - which portrays accurately the weather we encountered in England. Thanks to Rochelle for posting the prompt on her blog -
http://rochellewisofffields.wordpress.com/ 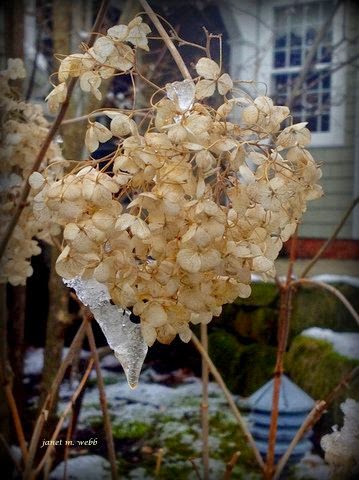 Sandra was checking Pauline’s shopping through the till when her hands froze in mid-swipe. “Is that Vanessa?” she hissed.

Pauline looked down the shop at the well-dressed woman. “It can’t be.” But it was.
“Hello, girls!” Vanessa chirped and emptied her basket – steak, gourmet salad, wine.
“Supper for two?” Pauline ventured. “Stephen’s back then?”