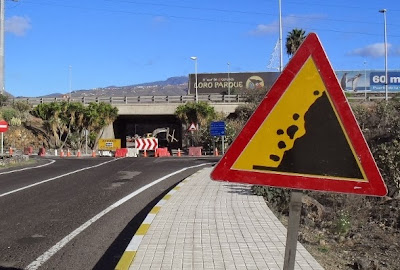 We see this sign all over Tenerife and usually drive light-heartedly past it.
As I blogged last week, we should not be quite so blasè, for although there was no warning sign here, on November 11th a rock face fell and almost crushed a young couple in their car.

Since then we locals have been following the progress of repairs with interest, because anyone wishing to go south on the motorway from here has to take another, more convoluted route, and the sooner it's fixed and re-opened, the better. 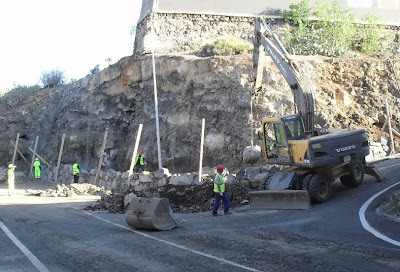 I walked up there this morning, and stood under the bridge to watch while a workman wrapped a canvas belt round a rock as big as he was. He then stood practically underneath it while a machine lifted it into position in what appears to be a retaining wall built from the rocks that fell. Recycling at its most basic. 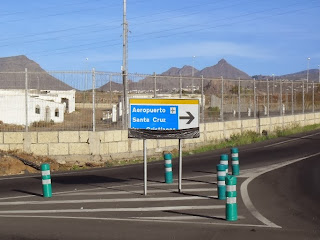 Oh yes - and someone has covered "Los Cristianos" on the road sign. I looked round the back and it's just several strips of black bin liner tied together, but I suppose it's better than nothing - perhaps I should take some parcel tape with me tomorrow?
Posted by liz young at 18:20