WATCH OUT - THEY'RE AFTER YOU! 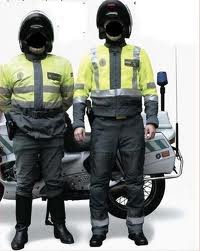 Long-term residents of Tenerife know they must be extra careful not to violate any traffic laws in the weeks before Christmas. Even the slightest infringement can get you pulled over, whereas at other times of year we see the most appalling drivers getting off scot free. We have always joked that the Traffic Police are after their Christmas bonuses from November onwards.

Now we learn that it isn't a joke - it's official. The Guardia Civil bosses have told all their officers that they have been falling behind in their duties, and that if they don't fine more drivers they will not get their 240 euro annual bonuses. That's scary.

It is difficult to get the better of the police, but the other day I heard about one man who foiled their plans. He was stopped for having his fog lights on unnecessarily and told he could pay a 100 euro fine on the spot.
"No thanks, I'll go to court," he said.
"But that will cost you more."
"It will take years to get to court in this country, and I'll be dead by then - I've got terminal cancer. Will there be anything else or can I go now?"
Posted by liz young at 10:41